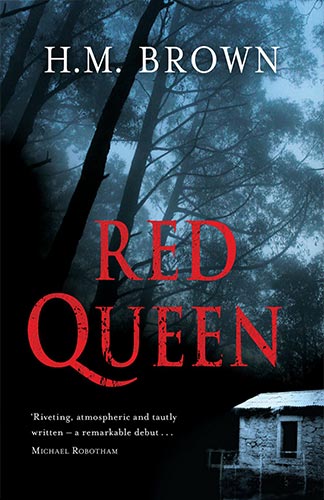 Author: H.M. Brown
Publisher: Penguin Books Australia
Copyright Year: 2009
Review By: Rose Mercer
Book Synopsis: Shannon and Rohan Scott have retreated to their family’s cabin in the Australian bush to escape a virus-ravaged world.  After months of isolation, Shannon imagines there’s nothing he doesn’t know about his older brother, or himself – until a stranger slips under their late-night watch and past their loaded guns.

Reluctantly the brothers take the young woman, Denny, into their fold, and the dynamic within the cabin shifts.  Possessiveness takes hold, loyalties are split, and trust is shattered.  Before long, all three find themselves locked into a very different battle for survival.

It took seven years for Honey Brown to release her first, most readable novel and it’s certainly a very successful start to this writer’s career.

Although Red Queen, is a dystopian psychological thriller, it also expertly explores the relationship between brothers when in the extreme situation of surviving in a world almost destroyed by a mutating virus. What happens when a woman inveigles herself into this tight, tense situation? What happens to society’s mores and conventions? The menace and breathless anticipation of what happens next starts right from the beginning as we learn what survival may entail for each character. Honey Brown has managed to explore what could happen under such circumstances and shows how humanity can adapt to anything – eventually.