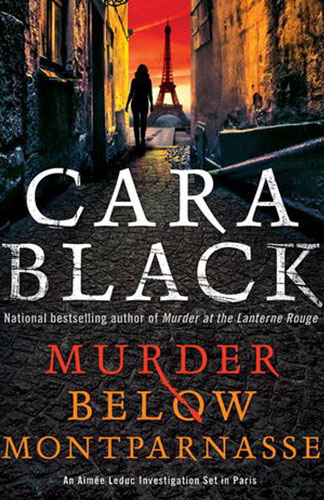 Author: Cara Black
Publisher: Soho Crime
Copyright Year: 2013
Review By: Sandra Nicholson
Book Synopsis:
A long-lost Modigliani, a grieving brother’s blood vendetta, a Soviet secret- Aimée Leduc’s current case is her most exciting yet.
The cobbled streets of Montparnasse might have been boho-chic in the 1920’s, when artists, writers and their muses drank absinthe and dances on café tables. But to Parisian private investigator Aimée Leduc, these streets hold darker secrets. When an old Russian man named Yuri hires Aimée to protect a painting that just might be a Modigliani, she learns how deadly art theft can be. Yuri is found tortured to death in his atelier, and the painting is missing. Every time Aimée thinks she’s found a new witness, the body count rises. What exactly is so special about this painting that so many people are willing to kill–and die–for it?

I was in Paris earlier this year and an Australian author, who has lived in Paris for more than 20 years, recommended Cara Black to me as a very good crime writer who also takes the reader on an armchair tour of Paris. I was addicted from page 1. Murder Below Montparnasse is Black’s 17th book in the series and all are set in a different part of Paris.

Aimée is a private detective who owns the agency started by her grandfather many years ago. She wears Chanel No 5, lives on coffee and most of her clothing is from Op Shops but are all designer brands. Her Godfather, Morbier, is a high-ranking officer in Paris’s police force but they have a strained relationship because Morbier knows more about Aimée’s mother’s disappearance than he is prepared to share with her. René was Aimée’s right hand man, and her computer expert, but he has been lured to Silicon Valley with dreams of sun, surf, women and ideas of becoming a millionaire. René’s story becomes a sub-plot when he realises the true reason he was hired and the fact that his naivety could land him in an American prison for a long time. What he does from that point on would rival the adventure of Indiana Jones. Saj also works with Aimée and is a computer hacker, vegetarian and exponent of eastern philosophy.

The plot in this novel commences when Yuri Volodin phones Aimée and tells her he would like to hire her to find a missing Modigliani painting. She states that she doesn’t do art fraud but he then dangles a carrot of a connection between the painting and Aimée’s mother and then Yuri hangs up. Before she has the chance to visit him, to find out more, he leaves another message saying that he no longer wants to hire her. However, he has given her 5000 Euro, which she must return, and she also wants to know about his connection with her mother. Saj is driving Aimée to Yuri’s when suddenly a face appears against the windscreen of the car. They stop and discover that the man is dead. Not far away from the scene of the accident Yuri has also been killed in what appears to be a home invasion and that the killers were looking for the painting but it had already gone. Saj is in hospital under police guard as a result of the accident and the dead body. However, Aimée has to find the painting to see if it will lead to her mother, who abandoned Aimée as a child, without explantion.

Aimée is fearless and her Godfather and friends would say reckless, in her pursuit of the painting even when it brings her up against the Russian mafia, black-market art dealers and Serbian murderers. Her great advantage is that she is a Parisian who knows her City well and this knowledge helps her to escape some treacherous situations. The book is complex and fast paced and it has a number of sub plots but Black brings all of the pieces of the puzzle together with credibility and ease. Aimée as a heroine is very addictive and like all good heroines leaves a great teaser for her next adventure. Great read.