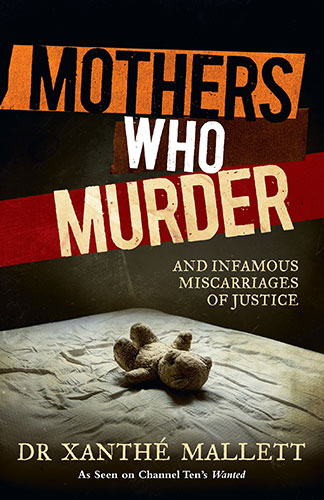 Author: Dr. Xanthe Mallett
Publisher: Edbury Press and Randon House Australia Pty Ltd.
Copyright Year: 2014
ISBN: 978 0 85798 380 0
Review By: Suzanne Bozorth-Baines
Book Synopsis:
Child murder: A social taboo and one of the most abhorrent acts most of us can imagine.
Meet the women found guilty of murdering their own children. They represent some of the most hated women in Australia. The infamous list includes psychologically damaged, sometimes deranged, women on the edge. But, as we will see, accused doesn’t always mean guilty.

Among the cases covered is that of Kathleen Folbigg, accused and found guilty of killing four of her children, even with a lack of any forensic evidence proving her guilt; Rachel Pfitzner, who strangled her 2-year-old son and dumped his body in a duck pond; as well as Keli Lane, found guilty of child murder though no body has ever been found.

If you’re a fan of true crime, you may have caught Xanthe Mallet on Channel 10 doing a segment on Wanted. I had seen her on the program and expected this book, comprised of case studies of convicted criminals and those women wrongly accused, to be somewhat formal and a bit stiff. Far from it!

Mallett claims not to be a journalist, but her style is readable and flowing, not jilted or overly academic. And an academic she is—the book contains 17 pages of endnotes. Her credentials include not only a Bachelor of Science in Archaeology, a Masters Degree in Biological Anthropological Science, but also a PhD in Forensic Facial Recognition.

She has come at writing this book from the societal perspective that a man may be accused of intentionally hurting a child sooner than a woman. And when women are seen to be perpetrators of a crime against a child, they are judged almost always from a visceral response by the public before the facts are fully known. Sometimes these judgment calls are fuelled by the press. Mallet states that she is offering opinions of the cases included and that her observations are just that and should not be taken as ‘all knowing’.

Mallett’s journey begins with a case well known to all Australians—Lindy Chamberlain. In this case she set up a format that she pretty much follows for all but the last few chapters—the scenario; the how and why of the investigation; the alternative perpetrator; the how of the crime; the evidence of the inquest; the outcome. She also includes the role the media may play in the conviction/exoneration of the alleged killer.

She explains that the ‘how’ and the ‘why’, should equal the ‘who’, and demonstrates this in her cases. She may have to delve into the background of the killers to understand the ‘why’, and she seems to fairly give each woman her due. Comparative cases are also included in the chapters. Accused and/or convicted women include Kathleen Folbigg, Kelli Lane, Carol Matthey, Rachael Pfitzner, Kristi Abrahams, and other killers from the UK. The time frame comprises the 1980’s until present day, with a brief inclusion of the McCann case from the UK, which is still under investigation.

Just as Mallett asks why do women kill children, she comes full circle and asks why do men? It seems that crimes against children often occur with the involvement of, or inclusion of the other partner in the relationship, be it man or woman.

Perhaps the most important question raised by this book is how can children be best protected from violence and/or death brought on by one or both of their parents? As in the Rosemary Batty case just in the headlines today, this question needs hard, firm answers, and soon.