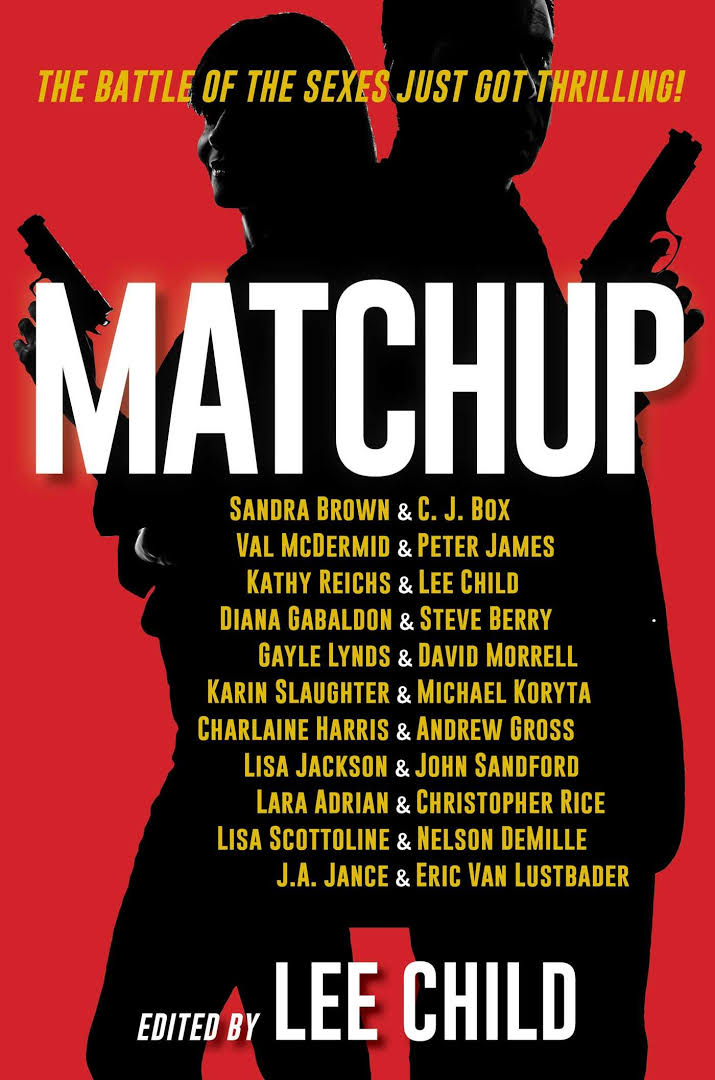 In this incredible follow-up to the New York Times and USA TODAY bestseller FaceOff, twenty-two of the world’s most popular thriller writers come together for an unforgettable anthology.

Did you know an organization called International Thriller Writers has been publishing anthologies of members’ short fictions since 2006? I didn’t, until this fat volume, the ITW’s most recent collection, came my way.

Match Up offers 11 collaboratively written stories that can be read in any order. The book’s smart point of difference is that each story has been co-written by two thriller authors, one woman and one man. And each story stars its two authors’ serial protagonists.

The editor of Match Up is Lee Child, British author of the hugely successful Jack Reacher novels and stories. As I learned from Child’s Introduction, Match Up was preceded by the 2014 Face Off, edited by David Baldacci. Face Off featured collaborative stories by big names, including Dennis Lehane, Ian Rankin, Jeffery Deaver, and Michael Connelly, and it became a New York Times bestseller. In all there were 11 stories and 23 contributors. If you’re puzzled by those numbers you need to know that one pair of thriller writers roped in R.L. Stine, the author of popular horror tales for children.

Of the 23 contributors to Face Off, only three were women: Lisa Gardner, Linda Fairstein, and Heather Graham. I browsed reviews online and didn’t find any bemoaning the lack of gender equity, although it’s probable there were some comments along those lines at the time. Child doesn’t remark on or apologise for the shortage of female writers in Face Off. He simply pitches the line that “this time it’s male versus female”.

However, it is not truly a case of ‘versus’, since the parties in each duo must cooperate to create a story that is sufficiently cohesive to be publishable. Similarly, Face Off was a misleading title, since paired writers weren’t meant to be fighting to outdo each other and their protagonists were meant to be working in tandem. As a title, Match Up gives a clearer idea of what is happening. Authors are matched, or ask to be matched (as was the case with Lisa Scottoline, who agreed to participate on condition she was paired with Nelson DeMille), and their characters are matched. As with all matchmaking endeavours, there is no guarantee a match will be a brilliant success in the short or long term.

As Child tells us in his Introduction to Match Up, some of the paired authors had never met before and none of the authors had ever written together. The pairs were given a deadline, and it was up to them to work out how to put together a story.

Child provides a foreword to each story. He writes colloquially, making these lead-ins easy to read and helpful. In each he tells a little about the two authors and their protagonists and gives a sense of how tricky or otherwise it was for the authors to collaborate. Lara Adrian and Christopher Rice were nicely matched, for instance, because both write in the paranormal sub-genre. But with Adrian setting her storylines in the future and Rice preferring the present, ingenuity was required. Rice had an idea. Adrian wrote the first draft, then Rice rewrote and edited.

At the end of the book there are author bios. The contributors are not only prolific ‘branded’ writers who have sold millions of books; some also have multiple series in several genres to their credit as well as TV, movie and other spinoffs. For such authors, it’s a choice: ‘which protagonist will I feature in my Match Up story?’

So, for instance, in ‘Taking the Veil’ J. A. (Judith Ann) Jance features her former news anchor character from the Ali Reynolds series that began in 2006, rather than a character from one of her other mystery series. Her partner, Eric Van Lustbader, had the choice of heroes from his various thriller and fantasy series, cycles and continuations, and picked his Braverman ‘Bravo’ Shaw character, a medievalist and cryptanalyst. The wildly improbable Jance-Van Lustbader story is set in Jance territory, Arizona, where members of a gnostic lay order have been out hunting an ancient relic, the Veil of Saint Veronica, which they believe has been secreted in a cavern in North America following a shipwreck. After one expeditioner is found severely injured and is hospitalised, Ali Reynolds, who runs a cybersecurity business, is invited into the action by an authoritative nun. She is to help locate the surviving expeditioners and, with luck, the veil. As the director of the Gnostic Observatines — who are pitted against a ruthless church-related organization that is also chasing the veil – Bravo Shaw heads the search party. Oddly, the nun, Sister Anlem, who has a role in framing and exposition, is a more strongly realised character than Ali.

Another author who had multiple series protagonists to choose from was Charlaine Harris, best known for her vampire fiction. She chose to use her character Harper Connelly, who has the capacity to locate dead bodies and visualise the last moments of deceased persons’ lives. Harper is matched in ‘Dig Here’ with Andrew Gross’s Ty Hauck, who has moved from being a tough guy police detective to working internationally in a private security firm. The disappearance of a young Western woman who was a trainee researcher in an Egyptian archaeological museum sees both Hauck and Harper called in by her well-connected family. As in the Jance-Lustbader story, a female intermediary connects the two sleuths and explains each to the other. In this case it is a local police inspector, Nabila, who bridges the gap between the oddly coupled investigators by driving them around and explaining the lie of the land as necessary. Thanks to Harper’s psychic ability the body and murder weapon are found, while Hauck does the describing and talking, his exposition telling us the who and why of the murder. ‘Dig Here’ has an interesting and well observed setting, moves at a steady pace, and has a plot that is credibly enough resolved, provided you go along with the psychic shortcuts.

If as the reader you expect these stories to give the paired protagonists roughly equal weight, you will be disappointed. Typically, there’s the sense that one of the two authors seized the lead. For example, Lustbader’s Bravo Shaw dominates: it is his protagonist whose interests initiate and carry the storyline, with Jance’s Ali Reynolds effectively a SUV driver and technical assistant. Similarly, Gross’s Hauck not only arrives in Egypt first, but his perceptions carry the story, with Harris’s Harper seen through his eyes.

Those of you who read widely across the thriller, mystery, and paranormal categories are likely to have a lot of fun seeing what so many of your favourite authors have done with their protagonists in Match Up. If like me you don’t know all the authors and their heroes, you’ll probably go for the familiar names first, and if these stories satisfy you’ll then try the unfamiliar duos. My first choices were the stories by Kathy Reichs (paired with Lee Child) and Val McDermid (with Peter James).

McDermid seems to have had a lot of input into her story, ‘Footloose’, originating the plot and expanding on it with dark humour and puns and absurdity, all of which dominate the police procedural element supplied by James.

Reichs’ terse storytelling style and knowledge of writing for screen are obvious from the start of ‘Faking a Murderer’ as she has her forensic anthropologist Temperance Brennan delivering a lecture before being publicly detained by police. Child’s roving loner, Jack Reacher, is introduced in much longer, denser paragraphs, and at first it looks as if the two writers are not going to meld. Reacher learns about the police matter, recognises a name, and turns up, whereupon a female intermediary, Brennan’s attorney, recruits him as a paralegal. From then on, the storytelling style is closer to uniform and the two protagonists connect with wit to spare. It’s a clever storyline.

Match Up is an anthology worth dipping into, if only to encounter big name authors you haven’t yet read, see famous protagonists in action, and think about how very different writers contrive to combine their interests. Just don’t expect the stories to be uniformly memorable. The quality varies, and I can’t see many if any of the pairings generating sequels.