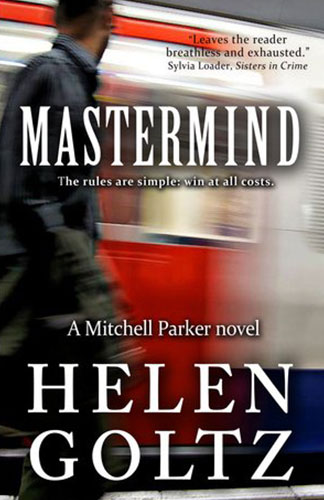 Author: H.M. Goltz
Publisher: Atlas Productions
Copyright Year: 2011
ISBN: 9780980753202
No of Pages: 500
Review By: Sylvia Loader
Book Synopsis:
You are playing a game online to create the perfect crime … or at least you think it’s a game …
A web site inviting game players to mastermind the perfect crime is more than a game, much more!
It is the facade for billionaire Lawrence Hackett’s real-life invitation-only competition to see who can perform the perfect heist. Only a select few are invited to play for the bounty at stake.
Special agent Mitchell Parker and his Washington D.C. based team span the globe
trying to prevent the real-life crimes before they happen!
Washington, Paris, London … the clock is on!

Mastermind is a fast paced action packed adventure written in two parts. The first deals with a projected gold smuggling plan in Nevada investigated by special agent Mitchell Parker and his team. But who is on his side? If the action on the ground, or under it, is exciting, that taking place in the air leaves the reader breathless and exhausted. The conclusion of the first part leads to the discovery that this crime is just one of a very select group of planned crimes. It is an invitation-only opportunity to enter the mastermind competition, the object of which is to complete the perfect crime.

In part 2 Parker is forced to juggle three crimes at once, in Washington, Paris and London. The team amasses an amazing number of frequent flyer points as they criss cross the Atlantic. The team members are very much individuals, slick, professional operators certainly, but also human beings with their own frailties. The criminals display great ingenuity, the pace is frantic through out and the final exchange at Canary Wharf in London absolutely breathtaking.

Finally, to one of my pet hates. The author, Helen Goltz, styles herself H.M.Goltz. Why? Presumably she, or her publisher, does it because female writers feel the need to disguise themselves so that men, and sadly some women, will not be put off buying their books. Even if this is a necessity, it is still a pity.