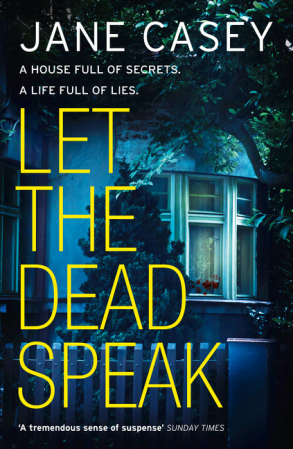 Eighteen-year-old Chloe Emery returns to her West London home one day to find the house covered in blood and Kate, her mother, gone. There may not be a body, but everything else points to murder.

Maeve Kerrigan is young, ambitious and determined to prove she’s up to her new role as detective sergeant. She suspects Chloe is holding something back, but best friend Bethany Norris won’t let Maeve get close. What exactly is Bethany protecting Chloe from?

As the team dig deeper into the residents of Valerian Road, no one is above suspicion. All Maeve needs is one person to talk, but that’s not going to happen. Because even in a case of murder, some secrets are too terrible to share…

This book kept me guessing all the way through, as more and more was revealed, up till the last word. Starting with a bodyless murder, leading to a newly promoted Detective Sergeant taking  charge of the direction of the early investigation, the twists continued to the end.

This is the seventh book in the Maeve Kerrigan series, but the first one I have read.  It was clear to me early in the book that there were links to the earlier stories, particularly the previous one, but this was not a problem because the author included enough filling-in of the backstory at relevant times to let the newcomer to the series understand the tensions and reactions between colleagues, that seemed unusual.

Most of the book is set in Putney, London, with a short excursion into Surrey and Hampshire. The detectives focus in on prime suspects early in the narrative, but the shifts in the story keep them guessing. At the start, investigating the first motive for murder, the team meets a family involved in a fundamental Christian church. Throughout the book there are references to biblical themes, including quotes from the Bible. This part of the book was quite well constructed, even though at times I was thoroughly annoyed by how the author was presenting the church in a negative way.

The newest member of the investigative team was not well drawn in character and, not being one of the main characters, became a convenient scapegoat for mistakes made by her superiors. Although she made a connection later in the investigation that proved crucial. I wonder if her part in the squad will be better developed in later books, if they come.

Maeve had the main voice of the novel, and most of the action included her. Her interaction with her superior Detective Inspector and their relationship (platonic) is very much a part of the subtext of the storyline. The author managed to frequently surprise me with fascinating twists and turns that kept me needing to read more.  I was glad that I was on holiday so that I could take the time to continue reading.

This is a book I recommend.  It looks at secrets in families and choices that may be made when someone gets into financial difficulty.