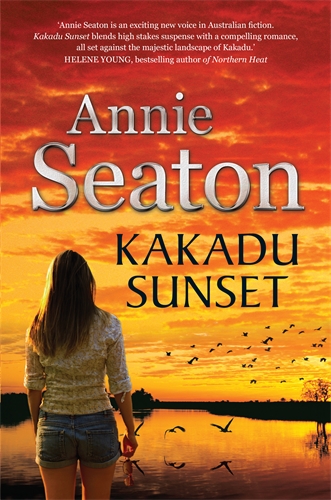 Helicopter pilot Ellie Porter loves her job. Soaring above the glorious Kakadu National Park, she feels freed from the heavy losses of her beloved family farm and the questions around her father’s suicide. But when a search-and-rescue mission on the boundary of the older property reveals unusual excavation works, Ellie vows to investigate.

The last thing she needs is her bad-tempered co-pilot, Kane McLaren, interfering. The son of the current owners of the farm, her attraction to him is a distraction she can’t afford, especially when someone threatens to put a stop to her inquiries – by any means necessary.

Ellie will have to trust Kane if she is to have any hope of uncovering the truth of what is really going on. Between Ellie’s damage and Kane’s secrets, can they find a way to open up to each other before the shadowy forces shut her up… for good?

How wrong I was. The plot soon became an exciting page-turner, a rippling confluence of rapacious mining tycoons, government corruption, personal intrigue, and yes murder, blackmail and kidnapping. It is a nail-biting journey skillfully orchestrated by the author Annie Seaton.

The heroine Ellie Porter, a  helicopter pilot at a tourist lodge in Kakadu National Park in the Northern Territory, uncovers illegal fracking mining on what was once her beloved family farm. Gradually we are faced with an unfolding litany of secret deals, the blackmailing and seeming naiveté of senior government Ministers,  environmental commissions of enquiry and Aboriginal land rights authorities. It is a race against time to save the rezoning and granting of mining licence approvals in World Heritage listed Kakadu Mational Park to unscrupulous developers. And along the way we learn of murder, blackmail and kidnapping – all in the processes of million dollar nay trillion dollar resources exploitations.

Central to the story of course is whether Ellie (as the author states page 130) “will finally let her defences down and give in to the moment” with the irascible Kane McLaren. And of course in the morning light she finds that “The wariness that he wore as a protective shell was gone. In the dim light, his long lashes feathered his cheeks and his lips were soft and slightly parted. The shadows beneath angular cheekbones were accentuated by the darkness of his stubble. The same stubble that had left her lips – and other places – tender after a couple of very thorough sessions of lovemaking” (pages 131/132). What fun.

This is a first novel for a woman with a rich lifetime of other life passages. She is fulfilling her lifelong dream of writing, and has been delighted to discover that readers love reading her stories as much as she loves writing them. She is now published internationally in e-books across the romance genre and in 2014 was voted Australian Author of the Year by romance readers in the AusRomToday.com Readers Choice Awards.

I think this book merits a larger audience.

I have done like Annie Seaton travelled Australia in a caravan. And one of the great pleasures of the book are her descriptions of life in the Northern Territory, crocodile stories, the personalities there etc. But the greatest pleasures so generously provided by Anna Seaton are wonderful images of Kakadu National Park and the importance of its preservation. There are some rather too stereotyped corrupt government members, Aboriginal and community elites. But it is a warning of how precarious these environmental decisions are.  These are aspects of the book which I just loved . Not only does this evoke my own delight in this wonderful land of ours. But I would sincerely hope that other readers who have not yet had the opportunity to travel through Australia slowly – not on an aeroplane – will also get great enjoyment out of these images and also the story so well drawn by Seaton.

Buy the book and then go to Kakadu !