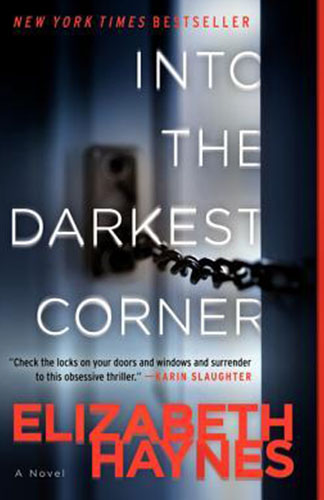 Author: Elizabeth Haynes
Publisher: Text Publishing
Copyright Year: 2012
ISBN: 9781921922541
Review By: Susan Woldenberg Butler
Book Synopsis:
Into the Darkest Corner,the stunning debut from Elizabeth Haynes is an edgy and powerful psychological thriller that asks the most terrifying questions: What if the man you love isn’t who you thought he was? What if he is so convincing even your closest friends can’t see the truth? What if he won’t let you go?
Catherine thinks she has found the man of her dreams when she meets the gorgeous, charismatic and spontaneous Lee. But there is a darker side to Lee.
As his behaviour becomes more and more erratic, Catherine plans her escape. Four years later, Catherine dares to believe she might be safe. But is she?

Sometimes you know from page one that you’re in for a good read. It’s the magic of black on white, type on paper, the total being more than the sum of its parts. So it is with Elizabeth Haynes’s psychological thriller, Into the Darkest Corner.
The story begins with a partial trial transcript of the crime for which Detective Sergeant Lee Brightman is convicted and incarcerated. Three hundred and ninety-six relentless pages follow. Catherine moves from the North of England to London, but is it far enough away? Could it ever be? Several years after the attack, Catherine checks doors, windows and a kitchen drawer obsessively … but is there a realistic element of self-protection in her OCD?
The story alternates in short sections of narrative between the past and the present, then and now, pre-and post-attack. This plot device seems not uncommon in these days of multi-tasking; it takes getting used to but soon stops drawing attention to itself. As Catherine rebuilds her life, a sympathetic female detective informs her that Lee is due for release. Is she in danger? At first, after Brightman’s release, nothing happens. Has he forgotten all about her? Can she now get on with her life and her new love? Then, during one of her checks, Catherine finds a knife and fork rearranged in the kitchen drawer, as used to happen Before.
Catherine intensifies her efforts and uses her new toolbox of insights gained from psychotherapy. A detailed exploration of OCD (which unfortunately is not spelled out as Obsessive Compulsive Disorder until far into the book) is intriguing and Haynes does it beautifully, at least from a layperson’s point of view. Catherine does seem to recover from OCD remarkably quickly and easily, but perhaps that’s the way when it develops as a response to a particular, recent circumstance.
The ending is particularly satisfying. Haynes leaves no loose ends dangling, sets up the seeds of Catherine’s OCS in the earlier narrative and generally does all those things that signify good writing. It is unsurprising that Haynes was chosen as the Amazon UK Rising Star for 2011. This, her debut novel, was Amazon UK’s Best Book of the Year for 2011.
Minor quibble: the new tenant upstairs conveniently is a male psychologist of an appropriate age who falls in love with her and helps her overcome her OCD. Haynes has done a wonderful job, it’s a real page-turner and well worth curling up with on a long weekend.