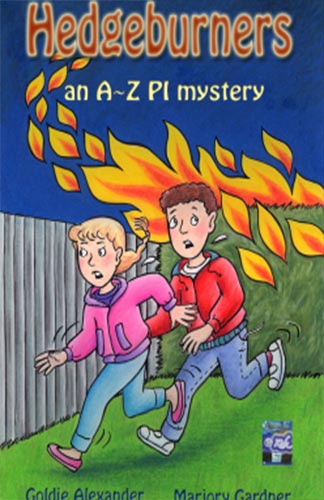 Author: Goldie Alexander
Publisher: Interactive Publications
Copyright Year: 2009
Book Synopsis: Old cypress hedges are going up in smoke all over Grevillia, a leafy Melbourne suburb and thirteen-year-old Anna,who’s been crazy about detective work since she uncovered the culprit pinching art materials in Year 5, is determined to track down the firebugs.

Her sometimes reluctant sidekick and best friend since kindergarten is Zach, the ‘Z’ to her ‘A’ in A-Z PIs. Zach, who narrates the story, already has lots on his plate – it’s just him and his dad, his homework is never done and he has to tend a hungry and demanding menagerie of birds, chooks, fish, cats, a dog and a pet rat called M whom he drapes around his neck.

The birds will go, his dad thunders, unless he catches up with his homework but with persistent nightmares and Anna dragging him out night after night to watch over neighbourhood hedges, Zach can hardly make it to school most days.

The problem is that the fledging detectives come across all sorts of potentially suspicious activities and a secret or two but lack any firm evidence. Anna, who is prone to lecture Zach on the importance of picking up gossip (right on sister), knows which of the neighbours is having affairs, who’s got unexplained money in the bank and who’s got financial problems but burnt hedges lower property values so how does that fit?

Are the real culprits Year 9s playing chicken and burning down hedges as dares? Or is it Bob the local homeless man or local petty crims Jack Nelson and Stinky Holway? And what about Zach’s other best friend, Ruby? How come she’s wearing expensive perfume and offering Zach a ticket to World Wide Wrestling but can’t afford a pet?

Clues and red herrings abound but the sudden disappearance of Brett, the cadet journalist with The Grevillea Times, suddenly makes A~Z PIs’ investigations all that more urgent. Brett was investigating the arson attacks and, had in Anna’s and Zach’s view, been unfairly named as a suspect by the police.

Hedgeburnersis a pacy, fun read. You feel you know these young detectives. They sound and behave like the thirteen year olds of our acquaintance. And the crime is real. Burning hedges in well-to-do older suburbs of Melbourne became the favourite pastime of certain private school boys for a number of years.

Anna and Zach rub along well as partners in detection most of the time. Anna is a bossy-boots but good hearted. The patient and sometimes put-upon Zach has his own peculiar way of interpreting people. Anna is a ‘pony’ because she’s all legs, the short but strong Ruby a ‘red-haired hippo’, and his dad a ‘balding gorilla’.

Compared to previous generations of young detectives, Anna and Zach have some technological advantages. Texting enables them to keep in touch in ways which would have sounded like science fiction to the likes of the Famous Five in the forties and fifties. But, solving the mystery still ultimately demands the same powers of observation, the ability to tie disparate pieces of information together, an understanding of people and their motivations plus lots of smarts. Anna and Zach have all these qualities in spades.

Hedgeburnerstreads lightly over lots of issues – mums who have affairs, dads (including Zach’s) who are looking down the barrel of bankruptcy and those who have lots and those who don’t – without ever being preachy. Alexander’s snappy turn of phrase and humour propel the twosome’s adventures down some interesting paths.

This is the first in the series. Let’s hope it’s not the last. The younger generation needs books like this. As I always say, it’s never too young to start on a life of crime.