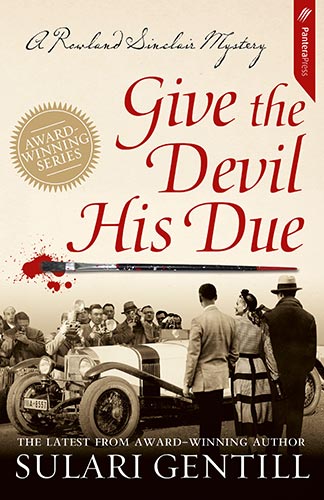 Author: Sulari Gentill
Publisher: Pantera Press
Copyright Year: 2015
Review By: Ann Byrne
Book Synopsis: “Give the Devil His Due”, the 7th novel in the Rowland Sinclair Mystery Series, begins with a piece of 1927 news from the Richmond River Express and the Casino Kyogle Advertise on the Moroubra Speedway. A concrete bowl race track that despite the banks being too steep for humans to walk up were not steep enough for the speed with a number of competitors losing their lives driving over the top of the bank.

Rowland Sinclair is to drive his bright yellow Mercedes in a celebrity race to raise funds for the Red Cross, the favourite charity of Elisabeth Sinclair Rowland’s mother who now resides permanently and happily at Woodlands House. Wilfred, Rowland brother still has doubt about this arrangement but it appears to be working a treat.

After an interview at Woodlands House about Rowland’s participation in the race in his German car, the Smith’s Weekly journalist, Mr Crispin White is found dead at Magdalen’s House of the Macabre in King’s Cross. Milton is accused of the murder and so his friends must solve the crime to ensure he does not spend time in jail.

But this is not just a story of a car race. Fascism continues to rise in Europe and Sir Edward Mosley offers no apologies for his “proud record in restoring free speech in the face of red terror”. Rowland is determined to give Australians information on what is really happening. An art exhibition of his reflections on Germany is organised – a discussion on politics and art ensues. Clever Gentill combining the past and present controversies.

Gentill is one of the Queen’s of historical crime fiction and brings to life a period of our history that in my view has not had a lot of air time. Her selection of events and characters gives her an amazing range of Australian life to draw from. She continues to use cuttings from the news of the day which adds authenticity and interest to the progression of the story line and its twists and turns. Personally I find the use of real newspaper clippings to centre the story within a historical time period a wonderful additional interest.

As loose ends are tied up Gentill never forgets to provide the reader with the rationale for the title “Give the Devil His Due”.

A great read and I am sure that the story continues…..