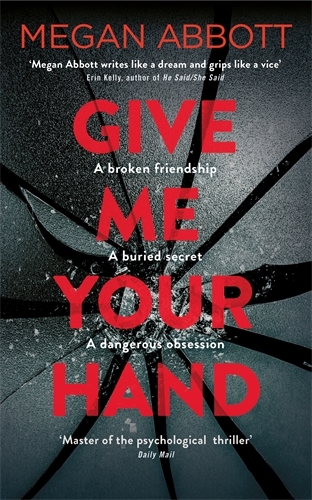 You told each other everything. Then she told you too much.

Kit has risen to the top of her profession and is on the brink of achieving everything she wanted. She hasn’t let anything stop her.

But now someone else is standing in her way – Diane. Best friends at seventeen, their shared ambition made them inseparable. Until the day Diane told Kit her secret – the worst thing she’d ever done, the worst thing Kit could imagine – and it blew their friendship apart.

Kit is still the only person who knows what Diane did. And now Diane knows something about Kit that could destroy everything she’s worked so hard for.

How far would Kit go, to make the hard work, the sacrifice, worth it in the end? What wouldn’t she give up? Diane thinks Kit is just like her. Maybe she’s right. Ambition: it’s in the blood…

Before Megan Abbott published her first novel in 2005, she wrote The Street Was Mine, an academic study of masculinity in American hardboiled crime fiction and film noir. Her early novels celebrate the hardboiled genre and are steeped in wonderful period detail, memorable female characters and snappy, idiomatic dialogue. By 2011’s The End of Everything, Abbott had skipped ahead to a more modern setting (well, the 1980s) and a plot that placed a friendship between two teenage girls at its heart. Since then, Abbott’s novels have explored female coming-of-age narratives, friendship, rivalry, sexuality and desire.

Give Me Your Hand is Megan Abbott’s ninth novel.  An intense friendship between two high school girls, Kit and Diane, ends abruptly when Diane reveals a terrible secret about herself. Twelve years later, the women are scientists and their paths cross again when they compete for a potentially career-defining position on a research team headed by the brilliant Dr Lena Severin. Dr Severin, a glamourous but forbidding character, is an expert on premenstrual dysmorphic disorder (PMDD), which is described in the book as a ‘catastrophic monthly dance between the hormones and the thinking and feeling parts of the brain’. PMDD has been raised as a defence in a number of criminal cases, including murder, and in 2013 it was added to the Diagnostic and Statistical Manual of Mental Disorders (DSM). The scientific detail Abbott includes about the disorder is fascinating and the novel raises some interesting points about how cultural and gender bias impacts on the way the disorder is viewed.

The narrative switches between Kit and Diane’s friendship at high school and the events unfolding in Dr Severin’s laboratories in the days before and after the coveted positions on the research team are announced. When she first meets Diane, the teenage Kit is smart but lacking in focus. Beautiful and privileged, Diane drives herself relentlessly to achieve academic perfection and she kindles Kit’s own desire to succeed.

Abbott sets her scenes really well. Much of the book takes place in the ‘fluorescent-banded labyrinth’ of the laboratories where Kit and her colleagues toil. Abbott relishes in the technical detail of the work, as well as the sheer physical grind of being bent over scientific equipment all day. As Kit’s plans begin to unravel, the creepily oppressive atmosphere of the laboratory adds to the drama.

As a lover of hardboiled fiction, I was pleased there were still echoes of the genre with its sleazy one night stands and broken dreams. There’s a strong sense of a class divide in this book and the scenes inside the pocket-sized house where the teenage Kit lives with her single mother contrast Diane’s wealthier background. Later, the adult Kit’s barely-furnished apartment with its vinyl bedroom blinds also evoke a life on the edge of the American Dream. Kit’s prize is so close she can almost taste it, but she realises far too late that she’s out of her depth. It’s not just the disturbingly ‘perfect’ Diane who threatens to undermine Kit’s plans. She’s also at the mercy of hostile male colleagues and the politics of an academic system where privilege and connections may well undo all her years of hard work.

While PMDD and female rage loom large, Give Me Your Hand is ultimately a book about female endeavour. As a female scientist, Dr Severin warns Kit, ‘you will have to fight your entire life’. The fight that unfolds in this psychological thriller takes its readers to some very disturbing, even horror-tinged places. If you haven’t read Megan Abbott’s work before, this is an excellent place to start. Either way, you’ll keep seeing her name. The film rights for Give Me Your Hand and her 2016 novel You Will Know Me have been sold and a television pilot based on her 2012 novel Dare Me is currently in production. She has also worked as a television scriptwriter on David Simon’s The Deuce, an HBO series set in New York’s fledgling pornography industry of the 1970s.