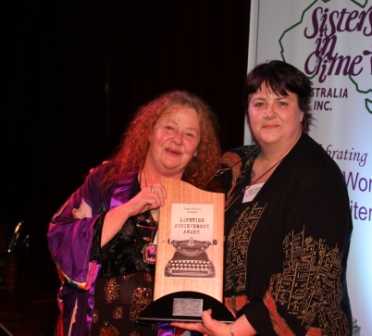 Lawyer-turned-writer Kerry Greenwood is of one ten women featured in the Her Place: Women in the West exhibition running at VU at MetroWest Gallery which runs until 31 March.

One of Australia’s most prolific and successful writers, Greenwood grew up in Footscray, daughter of a father who was a wharfie as well as a storyteller and a mother who was an avid reader with a love of history.

“The Women in the West exhibition is really important. Women’s stories so often disappear. Our lives are lost to history,” she said.

There not much chance that Greenwood herself will be lost to history. Her Phryne Fisher novels inspired the Miss Fisher’s Murder Mysteries series which Every Cloud Productions has sold to more than 120 territories. US fans are holding a three-day convention in May in Los Angeles. Three movies are Phryne Fisher are also planned. Her Place: Women in the West exhibition will screen show reels of the television series.

In 2018 Every Cloud Productions are shooting an eight-part series based on her Corinna Chapman baker sleuth books. “A big strong woman has been chosen to play Corinna who weighs in at 100 kilos in my books but I’m not allowed to reveal her name yet,” she said.

The other thing that has Greenwood excited these days is women’s football. A devoted Doggies fan, Greenwood admits she was doubtful it would attract a crowd.

“But everyone loves it. So many women are now playing it and even more if us are watching it,” she said.

For each of the profiled women, there is a short-biography, video and artefacts. Alberti, for instance is lending the exhibition an AFL 100 Years of Female Football, an AFL Victoria recognition plaque and a commemorative framed photo of the remaining 1954 Western Bulldogs Premiership Team. Greenwood will be represented by a battered lawyer’s briefcase, her Lifetime Achievement Award from Sisters in Crime Australia and a silk coat composed of different coloured panels on which more than 50 of her book titles are painted.

Her Place: Women in the West is the second exhibition organised by Her Place Women’s Museum. Six of the women featured in the exhibition, including Alberti, have been inducted onto the Victorian Honour Roll of Women.

Mary Stuart, founding Chair of Her Place Women’s Museum, said it was a travesty that the lives and experiences of women have traditionally been under-represented – and sometimes absent – in historical narratives, museum collections and the public sphere.

“Many women from the West have been additionally side lined due to race, class and access to education. Her Place: Women in the West Her is a rare opportunity to pay tribute to the many women who have risen above the challenges they have faced to make a mark on Melbourne’s West and beyond. The big challenge now is to replicate this initiative north, south and east,” Stuart said.

“A women’s museum is an idea whose time has well and truly come. Our first pop-up exhibition at Melbourne Town Hall last year attracted a large and diverse audience and everywhere I go the concept of an institution that recognises and honours the role of women is greeted with huge enthusiasm. The astonishing thing is that it doesn’t exist already.”

Stuart said Her Place: Women in the West was one of three exhibitions planned for this year, with two slated for regional Victoria.

“For nearly two years, Her Place Women’s Museum Australia has relied entirely on the hard work and grit of a small band of volunteers. Now with some seed funding from the state government we have been able to hire a few staff, though all very part-time. The big challenge is to keep up the momentum and attract enough funding and support to build a museum with real bricks and mortar, ideally in the museum precinct,” Stuart said.

Her Place: Women in the West will also display original works by students from Melbourne’s West around the themes of feminism and gender equality.

To accompany the exhibition, Her Place Women’s Museum is delivering a series of public and educational programs and professional development (see below). The program includes a walking tour around Footscray.