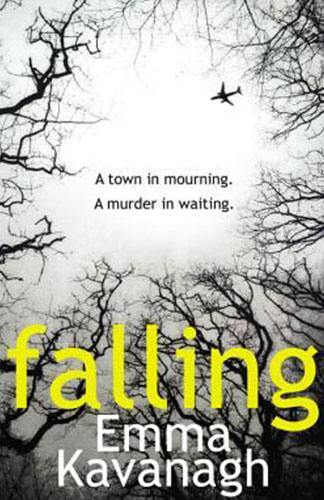 Author: Emma Kavanagh
Publisher: Century, London
Copyright Year: 2014
ISBN: 9781 780892023
Review By: Susan Woldenberg Butler
Book Synopsis:
A plane falls out of the sky. A woman is murdered. Four people all have something to hide.

Jim is a retired police officer, and worried father. His beloved daughter has disappeared and he knows something is wrong.

Tom has woken up to discover that his wife was on the plane and must break the news to their only son.

Cecilia had packed up and left her family. Now she has survived a tragedy, and sees no way out.

Freya is struggling to cope with the loss of her father. But as she delves into his past, she may not like what she finds.

Falling explores effects of a plane crash on four people and their families: Jim, a retired police detective; Tom, a police detective and husband of Cecilia, the flight attendant who pulled people from the wreckage; Cecilia, a survivor who feels trapped and suffers survivor’s guilt; and Freya, the artist daughter of the plane’s pilot, who died in the crash.

Members of these four families search for reasons why the plane went down, killing most aboard. Jim meanwhile is part of the team investigating the murder of his daughter. Tom, in addition to police work which includes searching for the killer of Jim’s daughter, is juggling single fatherhood with possible reconciliation. Cecilia is pulled back into a life she jettisoned the night before the accident. She feels trapped but responsible on several levels: for surviving, not saving enough passengers, leaving her husband and small son. Freya struggles to cope with the loss of her father, the plane’s pilot; but she doesn’t like what digging up the past reveals.

The novel’s pacing, mood, characterization and sense of place are all rendered beautifully and sometimes innovatively. Spare, short, clausey sentences make you care from the beginning, both about the characters and what happensto them. Dialogue is sculpted rather than splashed and contributes to a feeling of winter bleakness and life closing in.

Kavanagh’s tone is perfect for winter. Snow is a major player. It falls from the sky, as did the plane whose crash affected so many people.

Despite being a proof, this book is beautifully edited. The style is modern without being confronting. The title, Falling, could refer to snow, the aircraft spiraling from the sky or the way some characters feel about their lives. Purity, silence, whiteness and cold contrast with blood, noise, confusion and fire.

Falling is subtle, layered and textured, with no violence or heavy sex. Kavanaugh’s is a welcome new voice which I will actively search out.