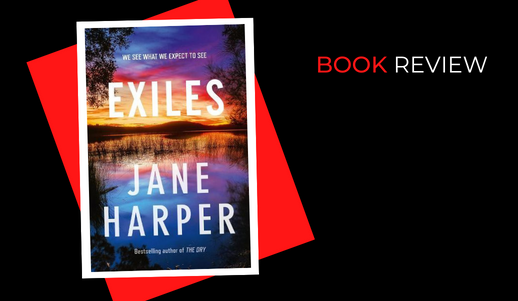 First published in The Age on 23 September 2022 and reproduced with permission.

Exiles, Jane Harper’s fifth crime novel, is dedicated to “the readers, who make these books what they are”. It’s an intriguing statement suggesting that the author certainly has her audience in mind as she writes. And with this book, Harper may well have given her legions of readers exactly what they have been waiting for: a beautifully observed crime novel about regional life featuring the reticent and endearing federal policeman, Aaron Falk, whom we first met in Harper’s hugely successful first crime novel, The Dry.

While Falk also appeared in Harper’s second book, Force of Nature, set in the fictional Giralang Ranges, Exiles marks a return to the regional landscape and narrative terrain that characterised The Dry, without, thank goodness, the murderous drought.

Like The Dry, the book opens with an abandoned child and a mystery: six-week-old Zoe Gillespie is discovered cocooned in her bassinet in the pram bay of the Marralee Valley Annual Food and Wine Fair while her mother, Kim, has gone missing presumed drowned. There will, nevertheless, be many reported sightings of Kim on that fateful night.

One year later, and Falk is on his way back to Marralee in South Australia in a second attempt to stage the christening of his soon-to-be godson, Henry Aaron Raco. Henry is the youngest child of Falk’s policeman friend whom he met some five years earlier in Kiewarra, the small-town setting for The Dry. Harper neatly stitches the backstory of The Dry into the present, with some updates about the characters we met that helps establish the continuity of Falk’s fictional world.

While the first christening was abandoned because of Kim’s disappearance, given she was the former partner of Raco’s brother Charlie, with whom she also had a daughter, there is a determination that the second will go ahead. It will, however, be preceded by an appeal at the annual fair initiated by Kim’s 17-year-old daughter Zara, who can’t accept either that her mother would simply abandon her family or that she would have drowned herself in the local reservoir. Suicide is the go-to solution, although the body has never been found.

While the mystery of Kim’s disappearance might be the narrative hook on which this crime novel hangs, what renders it so engaging is Harper’s keen observation of people and place captured in swift glimpses. Meeting his godson after a year, the toddler fixes Falk with a “glassy accusing gaze”, while his little sister Eva shyly slides a glittery hairclip into Falk’s hand. This is what small children do. Falk is clearly touched by this young family and their kindness as he contemplates an alternative country lifestyle on Charlie’s vineyard miles away from his workaholic existence in Melbourne.

Harper enables these comparisons through a series of flashbacks. They include the occasion when Falk first encounters Gemma Tozer, the director of the Marralee Valley Annual Food and Wine Festival, in a Melbourne bar while they are both waiting for Raco. Falk is one year out of another failed relationship with a woman who like him, always put her work first, though the damage appears to have been minimal, “the gaps had closed over as though they had never been there”. Ouch.

Gemma, too, has a backstory of when of her husband was hit by a car some years earlier while out running by the Marrallee reservoir, and she has a son, Joel, who like Zara is having trouble coming to terms with the death of a parent.

With the bereft Zara and Joel in focus, Harper, as in The Dry, once again shines a light on the secret lives of teenagers as they navigate the tricky transition into adulthood. Inevitably that involves a secluded spot above the fatal reservoir away from the parental gaze where generations of Marralee kids have hung out. It’s a potentially dangerous place that itself holds many secrets. Falk recognises the significance the moment he sees it, “a good drinking spot was a good drinking spot”.

In the end, Exiles is a book as much about friendship as it is about family. While there’s a crime at its centre, it’s also about kindness and care. The moment when Falk silently helps Joel clean the graffiti from his father’s memorial by the reservoir a touching case in point. Quietly and inevitably, the secrets and deceptions are unravelled as Falk finds himself deftly woven into the weft of this small community. In Exiles, Falk, may at last have come home.