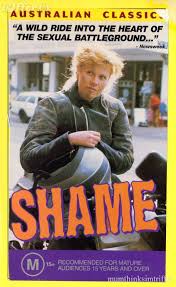 Shame, a wonderful feminist film produced in 1988 by ‘brother-in-law’ Michael Brindley, has a special screening at the Melbourne International Film Festival  – 4pm Sunday 13 August at the Forum Theatre. It will be followed by a  Q&A afterwards with actors Deborra-lee Furness and Simone Buchanan,  and director Steve Jodrell.

One woman – played by an award-winning Deborra-lee Furness – turns the tables on a country town’s system of entrenched male violence in this rip-roaring Australian action flick.

Asta, a hard-edged, motorbike-riding barrister, arrives in an outback town terrorised by predatory young men who attack any woman they can get their hands on. Discovering that a teenage girl has been brutally assaulted, Asta endeavours to bring the perpetrators to justice; but when the local authorities let them off the hook, she decides to take matters into her own hands.

A pulsating, over-the-top action thriller with a decidedly feminist bent, Shame – directed by Steve Jodrell (His Master’s Ghost, MIFF 1990) – is a classic of 1980s Australian cinema; Debora-Lee Furness’ performance as the film’s arse-kicking protagonist earning her best actress awards at both the Film Critics Circle of Australia and Seattle International Film Festival.

“Furness’ astute performance is easily one of the best of 1988 … a rewarding, powerful, and thought-provoking film.” – TV Guide