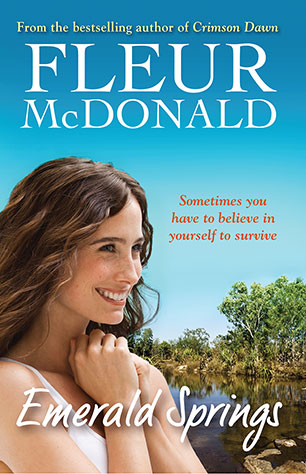 After finishing university, Amelia Bennett returns to her home town. Determined to lose her old reputation for being scatty, she works hard to prove herself as the treasurer of the local rodeo committee.

Flushed with triumph on the evening of the best rodeo in the town’s history, Amelia is driving the bags of cash into town when she becomes the victim of a terrifying smash and grab. Injured and distraught after her ordeal, she’s even more devastated when she finds out that she and her boyfriend Paul are the objects of suspicion.

To prove her innocence and that of the man she loves, Amelia must convince a sceptical detective that her account of what happened does add up and that he must help her track down the real culprits . . .

This is the sixth book from Fleur McDonald with remote country Australia providing the backdrop to the story, and a woman as the main character. This is the first of her books that I have read, but it has made me want to read more of her books.

Themes covered in this book are: opportunistic crime in rural areas; crime gangs targeting rural regions; members of country communities leaving for study and coming back to try to change the perceptions people had of them in their youth.

The main character, Amelia, has returned from studies and started working within the community. Her relationship with her mother is strained and some in the community still distrust her role on the committee for the rodeo. A romantic link is part of her life as well.

The book evoked images of rural South Australia, with descriptions that held enough imagery to set the scene, but left you able to fill in more from your memories. The story was well paced with the relationships between the various members of the community and the detective helping to maintain the tension towards the conclusion.

I found myself eagerly getting through the work day so that I could get home to read more – and then being disappointed to be interrupted by sleep and work till I could get back to it again, but in the meantime thinking over the story and trying to work out the culprit with difficulty.

The way that the book worked to the conclusion included an event that left me saddened, but in the final tying up of ends, it made sense. I had at one stage early in the story suspected one of the culprits, but had been put off the scent so well that, when the revelation came, I was again surprised.

To balance the prologue, there is an epilogue that tied up the romantic thread that had been left hanging at the end of the main story.