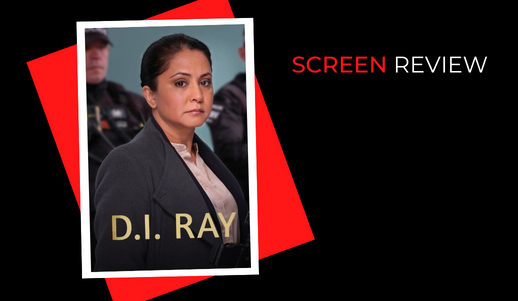 This British police procedural was created and written by Mara Sondhi. As an actor, you might know her from Line of Duty or one of the daughters in Citizen Khan. As a writer, you would not associate this drama with The Kumars at No. 42 or East Enders. Unlike her earlier work, DI Ray is a more serious drama – there are no laughs here.

Parminder Nagra (Bend it like Beckham) plays DI Rachita Ray with restraint. She is a detective promoted to Homicide as a token dark person. She has been brought in against the wishes of her bosses. They do not support her. She sucks it up.

In her private life, she is equally restrained. You feel her isolation from her partner, her family, her culture, and her colleagues. She has no one to turn to when the investigation ramps up, when her boss puts a spanner in the works, when DI Ray herself becomes the victim. She is making poor decisions. She begins to trust one fellow officer; that turns to hell.

The pressure builds and doesn’t let up. You want an outlet. You want her to explode in anger. You want her to play the race card against the bosses who use an allegation of bullying against her. She doesn’t. She continues to suck it up. It made me frustrated with her and at the same time absolutely, unconditionally on her side.

I don’t love DI Ray but I want a second series. I want to see her succeed. I want those in charge to be made accountable. Is this misdirected fury at Morrison?