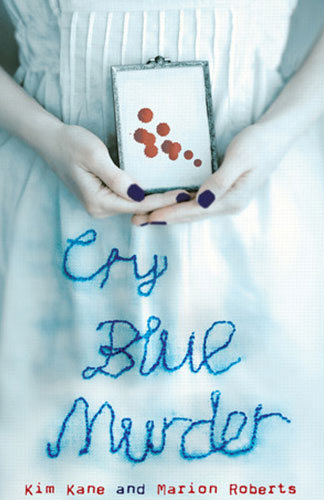 Author: Kim Kane and Marion Roberts
Publisher: University of Queensland Press
Copyright Year: 2013
ISBN: 978-0-7022-3926-7
No of Pages: 213
Review By: Sarah Robinson-Hatch
Book Synopsis:
Cry Blue Murder is the chilling and gripping book by Kim Kane and Marion Roberts.
A serial killer is on the loose, kidnapping schoolgirls. Three bodies have been found, each wrapped in a hand-woven fabric, dead. No one is safe… Alice and Celia tell each other everything: their secrets, hopes, and their fear of the killer who is abducting schoolgirls just like them. As clues emerge, it appears that no one can be trusted in a time like this and that the danger is closer than anyone wants to believe.

I absolutely loved reading Cry Blue Murder. Surprisingly, the thing I loved most about this book was how it was set out, which ironically was what I disliked the most about this book when I started reading it. Most of the book is written in emails between two girls named Alice and Celia who have met on a Facebook group dedicated to the missing Hallie Knight. In the beginning, I doubted whether this book would be able to make me feel like I was living right beside these two frightened girls, but it actually did. I was surprised by how well the authors could make me feel like I was a friend of Alice and Celia, and make me fear for their safety as much as they did as well.

Scattered amongst the emails were interviews with the police and suspects, official witness statements and newspaper articles. These helped the reader understand the investigation in a broader context. The interviews also allowed the reader to play the detective and piece everything together. Even so, the incredible plot twist at the end is cleverly hidden.

This book was creepy, puzzling and enthralling all at once. This book is a great thriller and one that’s impossible to put down.