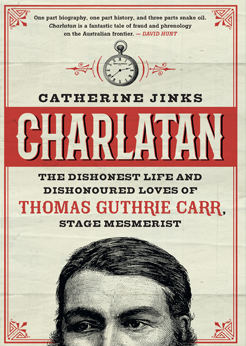 Thomas Guthrie Carr was charged by Eliza Gray with mesmerising her and raping her while she was under his influence. But if mesmerism and Mr Carr were shams, was Eliza really raped?

With a driving narrative and novelistic pacing, this scrupulously researched account of the life of Thomas Guthrie Carr, stage mesmerist – who lied, fought and sleazed his way around Australia and New Zealand between 1865 and 1886 – is more than just a fascinating piece of social history. It’s also a mystery, a true crime story and a slyly humorous portrait of a man whose ferocious pursuit of fame and fortune made him an oddly contemporary figure.

Catherine Jinks is an amazingly versatile writer.  Her always enjoyable novels have previously included a mixture of elegantly plotted and crafted crime (often historical or with supernatural influences) and other fiction for both adults and young adults.   With the advent of Charlatan, this body of work now includes true crime.

Charlatan examines the life of Thomas Guthrie Carr, a “stage mesmerist” who, after leaving Britain, operated in Australia and New Zealand between 1865 and 1886.  Carr, who at various times credited himself (without evidence of entitlement to either) with a medical degree and ordination as a minister, conducted stage shows in which he demonstrated the “art” of phrenology (the assessment of personality by means of examining skull shape) and “mesmerised” participants (many of them his associates).  Those he “mesmerised” were subjected to various physical tests, including being subjected to piercing by needles and minor surgery, such as finger amputations and tooth pulling, on stage.  Carr also offered private mesmerism and phrenology consultations.  His progress across Australia and New Zealand over the years was attended by controversy, with a trail of unmet debts, civil litigation, charges of assault, illegitimate children and professional and personal hostilities left in his wake.

Among those controversies was an accusation of rape by Eliza Gray and the subsequent trial, which forms the core of the book.  Gray worked in a clothing workroom where Carr attended to purchase clothing.  Carr invited Gray to be mesmerised; she refused, but agreed to attend two of his stage shows and later attended his rooms to assist him with clothing.  It was on this occasion that Gray alleged Carr mesmerised her with a swinging handkerchief and “took advantage” of her, leaving her afflicted with venereal disease which she subsequently passed on to her husband.  After extracting various payments from Carr for treatment, Gray brought her claim to court, where Carr was committed for trial.  Jinks takes us through the evidence, the colour and the contradictions leading to Carr’s committal.  Ultimately, however, there is no answer, no finding of guilt or innocence; the charge was dropped.

Jinks’ always engaging, fast-moving narrative weaves detail of Gray and Carr’s interactions and the trial with a fascinating account of Carr’s career and personal life, including a review of his stage shows and professional and personal allegiances and rivalries.  Jinks’ writing is engaging and sprinkled with humour, scandal and nuggets of history.  As the portrait of Carr unfolds, we are treated to a history of “mesmerism” and its more long-lived cousin, hypnosis, as well as a thorough exposition of the “art” of phrenology and an introduction to many of Carr’s contemporaries.  The portrait is of an era, not just of a man.

We are left with the tantalising question: did Carr, who was certainly guilty of many other misdemeanours, rape Eliza Gray?  For Jinks, it is possible that Carr wasn’t a rapist, “[b]ecause if he was a rapist, then he couldn’t have been a fraud”.  The reader, however, may on considering Carr’s history wonder if he was in fact both a fraudulent mesmerist and a rapist.  Why not read Charlatan and reach your own conclusion?