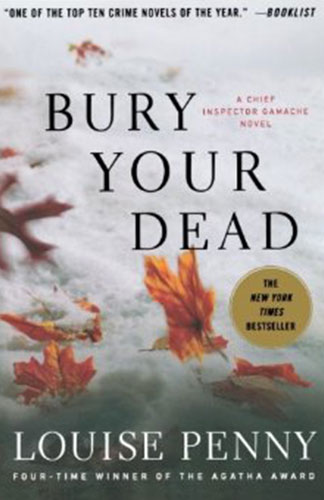 Recovering from injuries received in a botched case where he lost several officers Gamache finds himself in the wrong place at the right time. The place is the Literary and Historical Society of Quebec City, the time is just after the discovery of a brutal murder. Gamache is slowly drawn into the case by his desire to ensure the underlying and long standing tension between the English and the French does not damage the case. The undeniable attraction of a good mystery also plays a part. An old cellar, the missing body of the Father of Quebec, a passionate perhaps fanatical amateur archaeologist and a centuries old struggle for power in Quebec City all make Bury Your Dead a gripping read.

As Gamache works his way through the case at hand he struggles with his conscience and his failings. Penny expertly reveals the details of the previous case allowing the reader along with Gamache to unravel the mistakes and finally come to peace with the decisions made.

Alongside this mystery Gamache enlists the help of his second in charge Jean-Guy Beauvior to work an old case. In questioning his mistakes about the botched case he begins to believe he may have been wrong. ‘Why would Oliver move the body?’ are the haunting words sent to Gamache on a daily basis from the accused’s partner. Jean-Guy works the case again slowly discovering the truth as he slowly recovers from his injuries.

The reader is kept guessing right till the very end. When the truth is finally revealed it comes as a genuine surprise. Bury Your Dead is an excellent read.