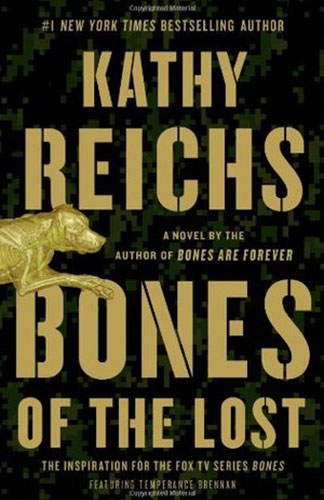 Author: Kathy Reichs
Publisher: William Heinemann
Copyright Year: 2013
Review By: Robyn Walton
Book Synopsis:
The body of a teenage girl is discovered along a desolate highway on the outskirts of Charlotte. Inside her purse is the ID card of a local businessman who died in a fire months earlier.

Who was the girl? And was she murdered?

Dr Temperance Brennan, Forensic Anthropologist, must find the answers. She soon learns that a Gulf War veteran stands accused of smuggling artefacts into the country. Could there be a connection between the two cases?

Convinced that the girl’s death was no accident, Tempe soon finds herself at the centre of a conspiracy that extends from South America to Afghanistan. But to find justice for the dead, she must be more courageous – and take more extreme action – than ever before.

Kathy Reichs’s 17th forensic anthropology novel, Bones Never Lie, has already been reviewed here for Sisters in Crime by Ruth Wykes. I thought the 16th was strong enough to warrant a review too, before we move on to number 18, Speaking in Bones, due out soon. The next again, the 19th Tempe Brennan investigation, may be the last, as Reichs has been telling reviewers she has a publishing deal covering (only) 19 novels. Although I must say that Reichs presented as such a dedicated (if not driven) writer when I saw her interviewed in Melbourne that I can’t imagine her readily abandoning the Bones series unless she had an engrossing alternative project in development.

In Part One of Bones of the Lost Tempe and her rough-diamond policeman ally commit themselves to identifying a young hit and run victim and finding out who or what she was running from. Maybe, so the two speculate in Part Three as their investigation continues, maybe the girl had been smuggled in from south of the border to work as a forced labourer in the prostitution industry. After all, Tempe is simultaneously looking into a curious matter involving mummified bones smuggled in from Peru. What if that smuggler and his shady associates are also …?

In the central section Reichs gives Tempe a rapid-fire round trip to Afghanistan to help out a friend of her ex, whose nephew, a marine, stands accused of killing two unarmed Afghan civilians by shooting them in the back. Here Reichs is making use of her own first-hand observations of US military operations in Afghanistan and Kyrgyzstan, a tour she notes in her Acknowledgements after offering ‘profound thanks to every member of the United States military, past, present, and future’. Needless to say, given this authorial patriotism, the marine is soon exonerated from blame, Tempe having come up with the necessary bone and bullet trajectory evidence.

For this reader, Reichs’s representation of the minutiae of what it’s like for a non-combatant to move around in a Middle Eastern war zone is interesting. For Tempe, the trip has several positive outcomes in addition to the exoneration. She’s able to report back to her ex that their energetic but laconic daughter is going well in her serving role over there in the forces. (“Relax, Mom. I’ll be fine.”) And a fleeting, almost wordless encounter with a pleading Afghani teenager in the company of a man in a shop on the Bagram base unexpectedly contributes to the solving of Tempe’s puzzling US case.

As usual, Tempe survives some exciting, life-threatening incidents along the way to ‘case closed’. And as usual her love interest, Ryan, is all but absent. Fortunately her cat, Birdie, is at hand to comfort her. ‘Cuddling with my cat,’ Tempe ends her story, ‘I resolved one thing. … I would celebrate those who refuse to give up. Those who battle to make things better.” Inspirational or insufferable? Your call, reader.