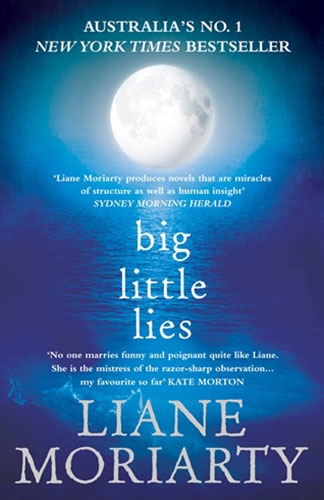 ‘Let me be clear. This is not a circus. This is a murder investigation.’

This is not a book to pick up when you only have a short time to read! I found myself getting annoyed with anyone or anything that interrupted my reading of it.

The narrative is woven around three main characters, Madeline, Jane and Celeste.

Madeline was married to Nathan and Abigail was the result of that union. Abigail is now 14 years old. Nathan, his new wife, Bonnie (a meditating, vegan, hippie) and their 5 year old daughter, have moved to Pirawee and become involved in Abigail’s life. Madeline struggled to bring up Abigail as a single parent and resents that Nathan has now shown up and wants to play ‘daddy’. Madeline is a great character who wears her heart on her sleeve.

Jane is a single Mum who has just moved to Pirawee with her 5 year old son, Ziggy, and she has enrolled him at he Pirawee Public School. She is quiet and self- conscious.

Celeste is married to Perry and they have 5 year old twin boys who are also about to attend Pirawee Public School. Celeste is beautiful and she and Perry are very wealthy and live in a mansion on the sea. However, she is very uncomfortable with anyone noticing her beauty of her wealth.

The three women meet up at orientation day at the school. Celeste and Madeline already know each other and Jane comes into this group when she helps Madeline after Madeline sprains her ankle. Orientation Day does not go well and the daughter of high-flying executive, Renata, accuses Ziggy of trying to choke her. Jane is crushed as she has moved to Pirawee to make a new start for herself and Ziggy. Of course she does not believe he did it but then she starts to have doubts when she recalls how he was conceived. Madeline and Celeste support her but before long a petition is started to have Ziggy suspended from the school. It is Jane, Celeste and Madeline against Renata and her hangers-on. The Trivia Night is the main event and all the protagonists are there but it is the death of one of them that shocks all involved. Was it murder?

Moriarty has been very clever in the way she has slowly developed each character at relevant times within the narrative. We are given the extra information about each protagonist at exactly the right moment as we start to look deeper into their actions.

In this novel, the themes of violence against women, expectations of parents, school politics are explored. There are so many interesting threads to this narrative that it shows Moriarty’s great talent that she has been able to explore them whilst at the same time place them within the context of the main story and then pull all the threads together at the end. The ending is a surprise but it will have you cheering for the ‘underdog’.

I enjoyed this novel immensely and I can highly recommend it for anyone who is looking for a great book to keep you interested for many hours – hopefully without interruption.