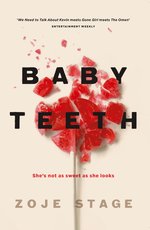 What would you do if you started to believe your child was a psychopath?

On the outside it looks like Suzette has it all. A stunning ultra-modern home, designed by her handsome Swedish husband. A beautiful, but silent, seven-year-old daughter who is fiercely intelligent. But under the shiny veneer, the cracks are all too clear.

For her daughter Hanna isn’t just clever, she’s dangerous. Her behaviour is carefully calculated. She adores her father, yet wants Suzette to disappear. And as Hanna’s tricks become increasingly sophisticated – from tampering with her mother’s daily medication, imitating a rabid dog, to setting Suzette on fire – it’s increasingly clear that there is something seriously wrong with their little girl.

Because what kind of child wants to kill their own mother?

This the first novel from American writer Zoje Stage, and it’s quite a page turner: a domestic psychological thriller that brought to my mind at least, the works of Stephen King.

Hanna is a sweet looking seven-year who can do no wrong in the eyes of her father, Alex. But the fact that she still isn’t speaking is not the only unusual thing about her. Her mother, Suzette, sees another side to her daughter, one that is manipulative and, as Suzette gradually realises, malevolent. Staff in pre-schools and kindergartens also see that side, as Hanna successfully gets herself expelled from them. However, Alex can always find a rationale and the rift between him and Suzette gets wider and wider. Worse still, after several expulsions, Hanna and Suzette are claustrophobically and catastrophically cloistered together as Suzette home schools her unusual daughter.

Chapters alternate between the point of view of Hanna and Suzette, and as we read first Hanna and then Suzette’s understandings of the same situation, a classic dramatic irony is established that drives the narrative and the tension. Hanna may not be speaking, but we quickly realise that it’s a choice that she’s made to further her own interests. Meanwhile, Suzette struggles to be a good mother and agonizes over what she may have done to cause her daughter to be as she is.

However, this is not a realistic, child-rearing gone wrong sort of story. From the beginning, Hanna’s point of view shows that she is an aberration, and the stuff of horror stories, not a child throwing tantrums who needs behaviour modification. There are, it is true, aspects of Hanna that are what we associate with young children: her desire to have a muddle potato under her bed like the one in the book; (perhaps her reaction to Suzette’s excessive need to clean and organize), or her excitement when Suzette makes her a rag doll that quickly becomes an alter ego.

But that’s where the similarity ends, and we don’t need to understand why she is so malevolent. The writing is tight, with depth of characterisation and excellent control of plot development, which creates and maintains suspense throughout. There isn’t a dull moment in the book and without giving anything away, the conclusion is satisfyingly creepy.