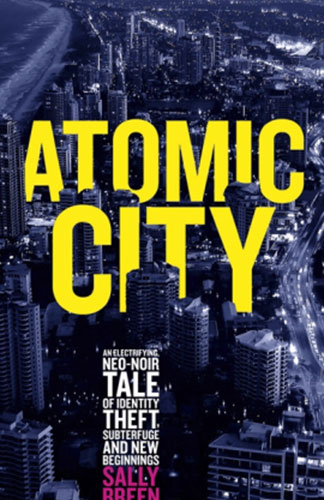 Sally Breen does Gold Coast well: the tall glass towers, the mirrors, the lights, the glaring sun, the clink of gambling chips that dazzle and bedazzle, and the shady low-lifes whose games are as illusory and deceptive as the blinding lights of the Atomic City.

The book is set out like a casino grid or a game of cards, with chapters alternating between basically two perspectives: ‘The Dealer’, told in first person by a man who has no other name than The Dealer, and “State of Play”, giving you the author’s voice and commentary.

One problem is that both voices sound the same and while Breen is brilliant at depiction of place and noir, dark and light, she falls down in the development of character.

Another problem is that the layout of her story into alternating chapters of “The Dealer” and “State of Play”, does not help drive the narrative. It fills you with promise but soon becomes prescriptive and repetitive.

While Breen’s clipped language can intrigue and tantalise, helping to drive the plot and giving high promise of depths of character and plot to be explored, in the end you get the feeling you’re on a circling casino wheel calling up slick truisms that are as shallow as the people they describe. I tired of them quickly. They promised much but went nowhere, and I found myself becoming increasingly frustrated at the contrived nature of the language.

There are two main characters in the book, Jade and The Dealer.

Jade, the femme fatale, opens the book. “This is Jade. Her story begins the first time you remember being lied to.” It’s a brilliant opening. It takes you into a timeless zone and you want to hear and understand more. But by the time you reach page 85, less than a third of the way into the paperback, the metaphors of the card game and the slick one-liners have been wrung dry: “Jade is playing on hearts. …When she holds the queens and the hearts, Harvey will not be immune to her strategies….” You have heard it all before, in different ways, and the dazzling atomic wisdoms add up to nothing but Gold Coast chimera.

While Atomic City is Breen’s second published work, the first being The Casuals, she describes it as a reworking of writing done while studying for her PhD. Perhaps this explains its repetitive and contrived nature. It would have held more punch as a short story, a quick, impressionistic, almost poetic work, rather than the laboured weaving of noir metaphors and the ‘play’ of undeveloped and unsatisfying characters. After the excitement of the opening chapters, I came to feel I was stuck in a traffic jam.

If you are dieting on experimental Noir, that sandwiches a fascinating evocation of Gold Coast dazzle with only a shred or two of lean meat, Atomic City will make a quick, lean lunch.