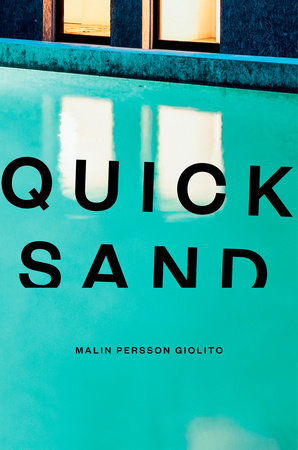 A mass shooting has taken place at a school in Stockholm’s wealthiest suburb. The narrator of Quicksand, Maja Norberg, is eighteen years old and on trial for her involvement in the massacre where her boyfriend and best friend were killed. When the novel opens, Maja has spent nine months in prison awaiting trial. How did the girl next door who was popular and excelled at school become the most hated teenager in the country?

Malin Persson Giolito was born in Stockholm in 1969. She holds a degree in law from Uppsala University and now lives in Brussels. She has written four novels including Quicksand, her English debut.

Crime novels written from the perpetrator’s point of view can be problematic. A major way for the author to build suspense is lost when it is known from the beginning who committed the crime; another problem is that a criminal’s character and motivation are often rather boring.

The extent of Maja’s involvement in the shootings is unclear for large sections of the story, though the prosecution’s case is strong. The narrative is structured day-by-day around the trial, interspersed with flashbacks.

After the first 100 or so pages, I began to feel manipulated by this technique. I wanted to know if Maja was guilty. I only had her voice to go by, since she speaks directly to the reader. I had no way to judge the veracity of her statements and I felt that she was stringing me along.

Maja’s voice is that of a spoilt, self-indulgent teenager. She is frightened and confused, but her narcissism grated on me.

Quicksand has been sold in twenty-four countries and has done extremely well. The press release accompanying review copies calls it ‘a blistering indictment of a country that is coming apart’. But I don’t buy this; I don’t think the writing is good enough to uphold the claim.