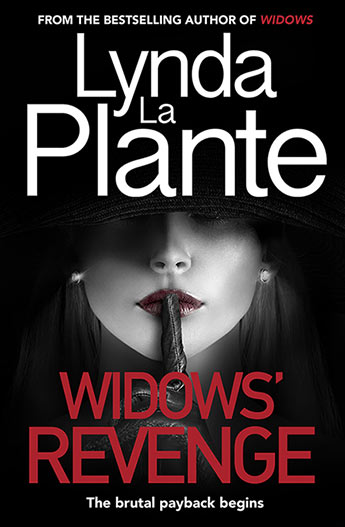 Dolly, Linda, Shirley and Bella are back. And this time it’s a fight to the finish. The sequel to Lynda La Plante’s groundbreaking thriller, Widows.

Against all the odds, Dolly Rawlins and her gangland widows managed the impossible: a heist their husbands had failed to pull off – at the cost of their lives.

But though they may be in the money, they’re far from easy street.

Shocked by her husband’s betrayal, Dolly discovers Harry Rawlins isn’t dead. He knows where the four women are and he wants them to pay. And he doesn’t just mean getting his hands on the money.

The women can’t keep running. They have to get Harry out of their lives for good. But can they outwit a criminal mastermind who won’t hesitate to kill?

Especially when one of them has a plan of her own…to kill or be killed.

Lynda La Plante is rightfully known as the Queen of Crime Drama, with hundreds of books, TV scripts and movies to her name. Widows’ Revenge is the follow-up to her breakthrough 1983 TV drama series ‘Widows’. The original group of gangland widows, led by Dolly Rawlins, must reunite to eliminate Dolly’s duplicitous husband Harry – who turns up very much alive after faking his death.

You can dive right in (as I did) without familiarising yourself with the Widows story so far, as there’s a brief summary at the start. Hindsight being 20/20 and all that, I would definitely recommend catching up with Dolly’s gang first before reading Widows’ Revenge. A more intimate understanding of the characters and their motivations would’ve made it much easier to get into the swing of things.

We’re introduced to Dolly and her mismatched gang after the major heist they pulled off in the first Widows story. Making sense of the tension between the women takes a while to come to grips with, which is where a familiarity of the previous hi-jinks would’ve come in handy. It felt like I’d started watching a TV show midway through the season, but you do eventually catch up.

The broad London East End accent of some characters is written phonetically and is a little clunky to read, sometimes interrupting the flow of storytelling. Once you’re used to it, the outlandish plot becomes much more fun and engaging. Betrayal, complicated jewel heists, several attempted murders, piles of hidden cash, honey traps of both male and female persuasion – it’s all here!

I absolutely loved having an all-female gang, plotting and scheming against the traditional English male wide-boy characters usually found in this genre. Lynda’s female characters are flawed and even occasionally dim-witted, which makes a welcome change to the femme fatale or ingenue tropes written by many male writers. The gang members find themselves unknowingly working at cross-purposes due to their differing backgrounds and motivations. Of course, this increases the tension and creates plenty of plot twists and diversions.

All up, Widows’ Revenge is a fun, roller-coaster adventure ride, a worthy addition to the Queen’s library.