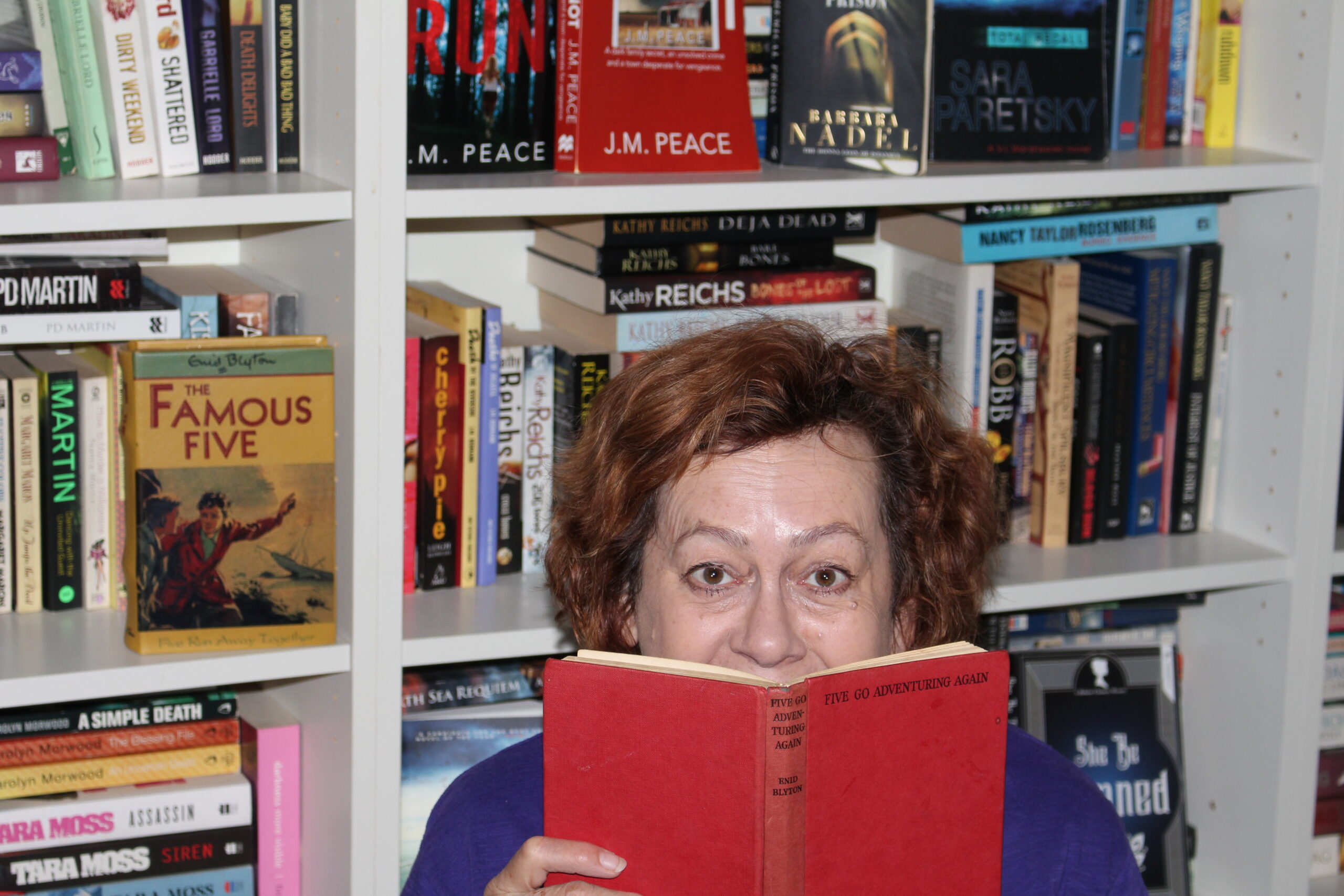 Madison Scott, a journalism student at Macquarie University in Sydney, interviewed Carmel Shute, co-founder of Sisters in Crime Australia for her recent assignment. Here’s what she wrote.

Julian, Dick, Anne, George, and Timothy inspired countless generations of children to find their own adventures throughout the pages of Enid Blyton’s Famous Five series. One of those children was a young reader on the other side of the world, Carmel Shute living in the Queensland bush — a far cry from Dorset where the series was set.

Blyton may not have had Australian kids in mind when writing the tremendous adventures, yet Five Go Adventuring Again, the second in the series was where Carmel’s love for crime fiction all began. After earning money writing letters to the editor of the Gympie Times, Carmel spent her money on books — particularly the ones where children solved mysteries, went on adventures to islands, found secret passages, and ate very fantastic food.

The agency given to children was what stuck out to Carmel who strongly identified with George, the defiant tomboy of the group. “I didn’t like Anne” she recalled, “I thought she would grow up to have a handshake like a limp fish.”

The influence crime fiction has had on Carmel’s life is undeniable as she shows me around her living room. Bookshelves line the walls and are categorized by male and female authors, with paperbacks crammed tightly on every shelf.

Sisters in Crime took off after Easter Friday 1991, with a program Carmel made for the Coming Out Show on Radio National, in which she interviewed feminist crime authors Sara Paretsky, Sue Grafton, Mary Wings, Lauren Wright Douglas, and Barbara Wilson. At the end of the program, Carmel promised listeners a bibliography of feminist crime fiction and the station got over 176 responses — a record for the time. “There was so much interest in feminist crime writing, so we thought, why don’t we start our own organisation, our own version of Sisters in Crime,” Carmel recalled.

Now 30 years later, Sisters in Crime has inspired countless Australian readers and authors, hosting author panels, interviews, writing competitions, and online events. At the heart of Sisters in Crime is fostering Australian women’s interest in crime fiction: stories of whodunits, mystery, murder, redemption, and revenge. Which raises the question — why do so many women read crime fiction in the first place?

It is indisputable that crime fiction is popular. Academic scholar Rachel Franks estimates that one in three books written in the English language falls into the crime fiction category and a recent Australian survey revealed that crime, mystery, and thrillers are the most widely read genre for Australian adults. But why do readers pick crime, time and time again when so many other genres of biographies, romance, fantasy, and science-fiction exist?

Crime fiction has had a stronghold on Australian readers for decades, from convict ballads to domestic noir novels. But why has it remained so popular? Is it due to Australia’s colonial past? Crime fiction’s ability to depict all levels of society? Or the genres’ ability to provide social criticism?

Regardless of why crime fiction has remained popular, it is clear that the genre has a large female audience. Whilst statistically women make up a larger portion of readers than their male counterparts, women’s fascination with crime fiction reveals a compelling insight into society.

“Crime allows us to think that we can solve a lot of problems,” Carmel explains, “that we can reach some sort of justice.” Scholar Lili Pâquet agrees, arguing the high percentage of female readers can be associated with the desire to see victims seeking vengeance.

However, it isn’t just female readers that dominate the crime fiction genre, with an increasing number of female authors re-defining the crime fiction novel. Historically, the genre has been dominated by men, “men with big egos who framed themselves as men with big dicks solving crime,” laughs Carmel.

Now, women are re-writing and transforming the genre, confronting topics such as domestic violence, sexual assault, and crimes within the home — questions men haven’t addressed in the past. Most importantly though, “they have kickass heroines,” Carmel points out. “Women aren’t just passive victims of male violence anymore, they’ve taken things into their own hands.”

These female empowerment female authors have managed to capture within their books has also begun to dismantle stereotypes of corporal authority, with many instead choosing protagonists who are amateur sleuths taking justice into their own hands.

But writing in a male-dominated genre isn’t easy, with lack of recognition one of the biggest challenges female authors must face. “It’s been an ongoing struggle to get properly recognized,” muses Carmel. “Any bloke who puts out a crime novel, you see them on all these panels for this and that and in writers’ festivals, yet it’s still quite hard for women to get that sort of level of professional recognition.”

Whilst it is undeniable that female authors of crime fiction must overcome numerous challenges and obstacles, the work they produce provides an interesting insight into wider societal influences. Women writing crime fiction have influenced the genre substantially, shaping the new and highly popular sub-genre of domestic noir and writing some of the most popular crime fiction of the decade including Gone Girl, The Silent Wife, and the Australian-written books, The Dry and Big Little Lies. Whilst it is evident that these books have challenged the stereotypes of the genre, it is particularly interesting to explore how female authors differ in approaching the depiction of the victim.

A publisher once told author Jessica Mann “dead brutalized women on covers sell books, dead men don’t”.  It’s a harsh view of crime fiction novels — that the exploitation, murder, and violence against women is what makes it interesting. The new wave of female crime writers is challenging this notion, writing their victims in an inherently different way to their contemporaries. “There’s less lingering on the dead female body,” argues Carmel, “unlike the sort of exploitation that can emerge from the male gaze.” Yet this re-configuration of the victim echoes a fierce critical debate on the role of violence in crime fiction.

Does writing about violence against women draw attention to the very real violence and misogyny of real life? Does it provide an opportunity to scrutinize society? Or is the brutality and murder used as entertainment undermining the plight of women’s rights movements? It’s a difficult conversation that has recently received attention after Australian author Jock Serong won the Staunch prize, an award for crime fiction “in which no woman is beaten, stalked, sexually exploited, raped, or murdered.”

The award has received mixed responses amongst the book industry, with both supporters and opposers vocalizing their perspectives. Nevertheless, the Staunch prize has highlighted the possibility of successful crime fiction storylines that aren’t dependent on rape, murder, and violence as entertainment devices.

Crime fiction can exist without gendered violence being explicitly written about, a point Carmel distinguishes between male and female authors. “In most of the women’s books I think there isn’t a lot of overt violence, a lot of the violence happens off the page,” she said. Not only does this allow the books to explore much deeper themes by not relying on the shock value of violence and gore, but it also allows female protagonists to take control.

“Violence is something all women are alert to,” Carmel determines by the end of our discussion, “yet I think crime fiction gives women some sense of control over their lives.” In a world where violence against women is constant, it can be empowering to read about female protagonists doing it for themselves.

Crime fiction can offer an escape – what-if scenarios where victims seek justice and satisfying endings are usually on the cards. Crime fiction can offer control to readers no matter how many twists and turns the author throws. Even with the most unsolvable locked-room mystery, the answer is always there, even if you can’t see it until the very end. And it’s this control, this alternate universe full of justice and answers, that keeps women reading crime fiction.