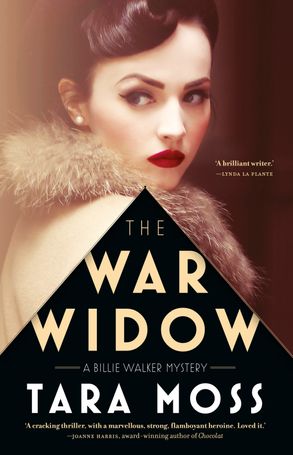 Sydney, 1946. Though war correspondent Billie Walker is happy to finally be home, for her the heady postwar days are tarnished by the loss of her father and the disappearance in Europe of her husband, Jack. To make matters worse, now that the war is over, the newspapers are sidelining her reporting talents to prioritize jobs for returning soldiers. But Billie is a survivor and she’s determined to take control of her own future. So she reopens her late father’s business, a private investigation agency, and, slowly, the women of Sydney come knocking.

At first, Billie’s bread and butter is tailing cheating husbands. Then, a young man, the son of European immigrants, goes missing, and Billie finds herself on a dangerous new trail that will lead up into the highest levels of Sydney society and down into its underworld. What is the young man’s connection to an exclusive dance club and a high class auction house? When the people Billie questions about the young man start to turn up dead, Billie is thrown into the path of Detective Inspector Hank Cooper. Will he take her seriously or will he just get in her way?

As the danger mounts and Billie realizes that much more than one young man’s life is at stake, it becomes clear that though the war was won, it is far from over.

The War Widow is the first in Tara Moss’s new crime fiction series.

In 1946 Billie Walker returns to Sydney from war-torn Europe. Billie, once a war photographer, inherits her father’s private investigation firm and fights to establish herself in the male-dominated profession.

Two investigations come her way: the first a mother hires Billie to find her missing son who disappeared after a night out; the second Billie is approached by an acquaintance concerned about her friend and other young women employed in a house located in the Blue Mountains.

The investigation into the missing son is well paced: why has the young man disappeared?  As Billie looks into the case, someone attempts to set her up to be arrested by the police.  Billie’s ingenuity and with aid from her mother and servant are part of a scene that has remained strong in my memory.

When the missing son is found, links to the second case are unearthed, providing an interesting transition. Through coincidence and observations two disparate cases are solved, linked to one location.

The ending was sudden and to me a little disappointing (the only part of the story that was). I had hoped for more interaction between Billie and the police inspector.

I read The War Widow during lockdown at which time it was taking a long time to read books due to work commitments, but this book was an exception. I enjoyed it so much, and was transported to a different place and time with Billie – one tough woman; Sam her charming, male assistant; and Inspector Cooper (someone I hope returns in the next book). The War Widow brought to life the diversity of Sydney at the end of the war that kept me engrossed.

A book well worth the read, and a perfect distraction.