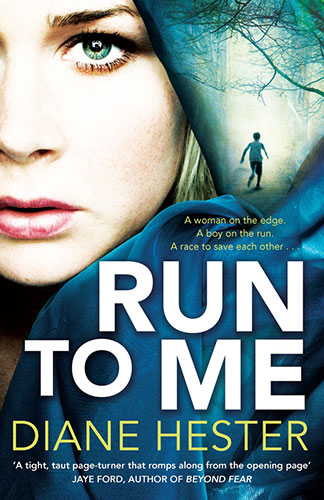 Author: Diane Hester
Publisher: Random House Australia
ISBN: 9781742756424
Review By: Sandy Curtis
Book Synopsis:
It’s been two years since Shyler O’Neill’s beloved son Jesse was killed – but his final moments are as vivid to her now as they were that dreadful day. Suffering from post-traumatic stress, and convinced she did not do enough to protect him, she retreats to an isolated cabin in the woods of northern Maine.

Meanwhile, Zack Ballinger – a ten-year-old boy who has never known a mother’s love – finds himself in the wrong place at the wrong time. He’s seen too much and is now running for his life. Fleeing into the woods, Zack soon finds himself at Shyler’s cabin. He’ll take whatever help she can give – even though, for some reason, she keeps calling him Jesse …

With the pursuers hot on their heels, ‘mother’ and ‘son’ go on the run. Protecting Zack may well be Shyler’s one chance at redemption.

Either that, or she is the child’s greatest threat …

The front cover endorsement by Jaye Ford reads ‘A tight, taut page-turner that romps along from the opening page’, and it’s a very good indication of what readers should expect. This is a fast-paced novel with a lot of action, but it doesn’t detract from the excellent characterisation. Shyler is a woman trying desperately to clutch onto sanity in the wake of horrific loss. Her PTSD makes it almost impossible for her to interact with people, especially children, except on a cursory level. So when she discovers an injured boy in her cabin, her mind copes by making him her ‘returned’ son.

Zack has only ever known a distant mother and years of fostering, and has a street kid’s attitude to life. Having to accept Shyler’s ‘mothering’ makes him susceptible to the need for love that he has long denied. It is an interesting concept and the author handles it well, without making it maudlin.

Shyler and Zack are well-drawn, and although the doctor who becomes integral to their survival could have been fleshed out a little more, it is Shyler and Zack who are most important to the reader.

I had a slight problem in the way the reason for the criminals taking Zack from the foster couple is revealed. Having an explanatory conversation afterwards did allow Zack to learn the real reason for his supposed ‘good fortune’, but logically the two baddies would have already known why they needed to get the boy. But this was a small glitch in an otherwise extremely well-written story that is definitely a page-turner.