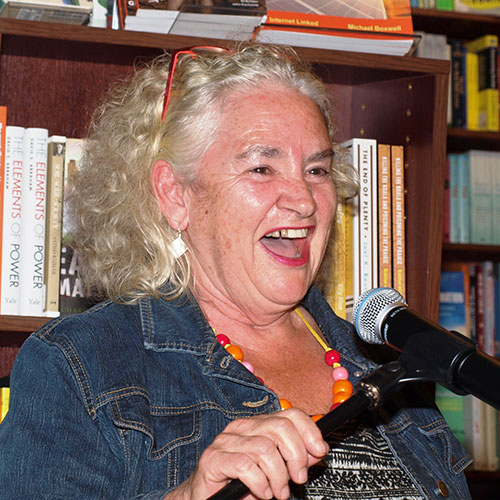 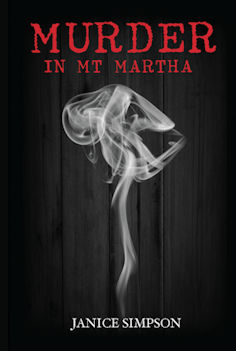 Hi Janice. Your book gives us a fictionalised account of the events surrounding the violent killing of a 14-year-old girl south of Melbourne in 1953. As well, you cleverly develop a series of parallels in the modern-day inner city, and gradually the two narrative streams come together. I’m going to pose questions about the contemporary content, leaving it to you to decide how much or little you want to give away about the murder story.

Arthur Boyle is working with a university researcher, supplying his memories of living in 1950s’ Melbourne as a teenager. How did you go about creating Arthur’s voice and knowledge? And is he a reliable informant?

I grew up in the 1950s at Apsley, a very small town about six miles from the South Australian border. My father ran a fine wool merino farm along with Mum, and both were involved in practically everything in the community – football, tennis, CWA, church, school, local agricultural shows, bowls and so on. This meant I met the full range of personalities and by close observation – I was a watcher and listener even then – it was easy to find voice. Arthur is a very reliable informant. I read a lot of newspapers from the period in the State Library of Victoria and, of course, dredged my memory for details about Melbourne that I knew as a child visiting my aunts who lived in the city.

Boyle recalls a few 1950s’ killings that were reported at the time. He especially remembers the death of 14-year-old Beverly Middleton because he worked with her in a Coles store. What led you to focus on Beverly’s case?

The actual murder that the character Beverly is based on, was Shirley Collins. Shirley was 14 years old and worked fulltime in Coles Variety Store in Bourke Street prior to her murder. I visited this shop as a child, loving the fourth floor cafeteria with its art deco trims and colours. I also loved to ogle the preposterous desserts in tall glasses arranged in rows for customers to slide onto their trays and take to the cashier. Shirley’s murder was brutal and violent. It was a front-page story for days and never really disappeared, as the police interviewed more and more people but were never able to charge the perpetrator. I began writing this story as nonfiction, but realised that a fictional account attempting to explain the killer’s motivation and life would be more engrossing to write and for people to read.

Boyle says the police were reported to have used a “black tracker” at the Mt Martha crime scene. You decided to keep your account of the 1950s’ investigation at a remove rather than telling it up close from the point of view of the investigating police or grieving relatives…

I didn’t feel I knew enough about policing in the 1950s to write a police procedural. (I probably still don’t but that hasn’t prevented me from writing a police procedural crime series featuring a detective team lead by DC Angela Micelli and DS Brendan O’Leary.) The newspaper reports described various police endeavours, some of which I did fictionalise, including the hiring of a blacktracker. This I knew a little about because of stories told to me by my parents, as well as the story set near where we lived, “Lost in the Bush”.

Shirley’s mother left Shirley in the care of the Collins family who lived across the road from her before she moved north to remarry. Shirley had no siblings and there was no mention of her father. He could have been one of those men who didn’t return home after the Second World War. Her mother did return to Melbourne for Shirley’s funeral, but the mother character didn’t capture my attention as a writer. Now that you have asked the question, I can see how this could have been a good angle. My research indicated that the Collins children were still alive, and I did not want to write about people who were directly connected to the case. Subsequent to the publication of the novel, a relative of one of those children contacted me asking why I chose this case to fictionalise.

As a teenager, Boyle lived with his mother, father and Uncle Ern, who was 21 and living “hard and fast” in company with his mate Johnny Santini. You tell much of the 1950s story from Ern’s point of view. What was it like developing the Ern and Johnny characters?

Readers may notice the tissue of lies that were used in the Boyle family to disguise out-of-wedlock pregnancies. Family secrets and lies, something that my PhD research also covers, have a lifelong damaging effect on individuals. Of course, not all individuals turn out to be sociopaths like Johnny and Ern, but a disproportionate number do. I also conducted research using academic papers about crime and psychology to help me further understand damaged characters. Getting into their heads was not hard, actually, although writing about cruelty to Arthur’s cat and the Labrador dog was very hard.

Researcher Nick Szabo had a Hungarian grandfather who defected to Australia when he was competing in the 1956 Olympic Games in Melbourne, and he visits his elderly grandmother, Zsosy. Did this choice of cultural background for Nick pose any challenges for you as the author?

In 2008 I spent 7 days riding through Hungary, including a two-night rest in Budapest, which whetted my appetite for modern Hungarian history. I wrote this in my blog at the time: “Budapest is a city where very grand buildings of all styles vie for space between the statuary, roads, tram and train lines. It bustles and hustles, sirens scream all day long and traffic is wild. I was told today that Hungarians like animal husbandry and raiding other countries, but it seems that Hungary has been raided more than it has raided, at least in recent times. There is evidence of the bullets and shrapnel from WWII on some of the buildings although many were completely destroyed along with all the bridges during that period.” I also visited a city market that was strewn with packets of red paprika, and, of course, the Danube was never very far away. Again, more research to fill in the gaps. The migrant experience was largely derived from my neighbours in Collingwood – the Boyle family house is the first house I owned, incidentally – Greek and Italian families whose English was only just there, their homes decorated much like Zsosy’s home.

Boyle and Nick are both having to negotiate tricky personal territory. There are pregnancy and parentage issues in contemporary Melbourne and in 1950s’ Melbourne and Budapest. Any comments?

La plus ça change, plus c’est la même chose, as the saying goes. Humans have sex; that is a constant of what it means to be human. When people have sex, and this fact has been known for a long time now, pregnancy can and does result, even though we still seem surprised by this. And regardless of how that pregnancy ends, a person’s life is changed irrevocably. Being a parent is a hard gig. It takes you to the edge of who you are. It’s fair to say that Nick is reluctant to become a parent, common enough for the young people I work with at uni. Beginning a family is delayed until the third or fourth decade now. And Lazslo’s baby, the character Dagmar Havlec, whom Lazslo never knew, was a common enough occurrence in Europe in the 1950s where lives had been seriously dislocated by the war and its aftermath.

The 1950s’ storyline takes a leap to far north Queensland. How did you get a feel for that part of Australia?

My brother went by train to Cairns and sent a folding picture postcard that I still have. This was the inspiration for Townsville as a setting. Although I was aware of the 1980s’ Fitzgerald Inquiry into police corruption in Queensland, I did not realise I had captured it in fiction until one of my first readers pointed it out. I’d holidayed at Magnetic Island so that seemed familiar, and an old man I know was born at the Townsville Hospital, so Townsville it was. Again, research. It’s a good story about the swim and the royal visit, isn’t it?

Boyle’s cat unwittingly helps him discover a cache of old clippings. Did you enjoy including an animal character?

Every book needs an animal, don’t you think? I have been surrounded by cats and dogs all my life – I don’t mean that in a mad-cat-woman sort of a way – but they were always a presence on the farm, and later in life as pets. My mother had an adored cat up until her death, and I think the relationship between Boyle and his cat, Tiger, is based on my mother’s relationship with her Tabby.

And what about Nick’s cycling?

Tania Chandler writes in Dead in the Water that characters are one-third the author, one-third the author’s friends and one-third imagination. So because I am a bike rider, it came easily that Nick would ride a bike, too. (My detective Ange Micelli also rides a bike, much faster than me, though.) Besides, if you live in the inner city like Nick and you’re a student and worker in the CBD, riding a bike is a great form of transport.

Finally, Janice, anything more you’d like to tell us about Murder at Mt Martha?

Robyn, your questions have been wonderful. Thank you so much. One of the joys of being a published author is the opportunity to visit libraries and talk to people, as well as be invited to writing events. It was a good book to write and I hope readers have enjoyed it, too.