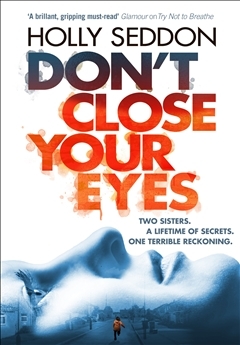 Holly and Sarah are twins. Not identical twins, in fact, not even vaguely similar, yet they love each other dearly. That is until their family is torn apart by an almost unimaginable domestic drama.

Now in their 30s, the sisters have lost contact. Robin’s career as a famous rock musician is in tatters, and she has become profoundly agoraphobic. She spends her days working off her panic-driven energy and watching the neighbours. Then she sees something shocking.

Meanwhile, Sarah’s seemingly perfect life – handsome husband, beautiful daughter – comes apart when she is accused of something terrible. Sarah knows the only way she can rebuild her family is to confront the past. And to do that, she has to find Robin, her other half, the twin who always supported her when it mattered most.

But someone else is also looking for Robin, trying to batter through the defences she has constructed. Something dangerous has been set in motion, and the only way forward is to go back.

Don’t Close Your Eyes is an unusual but very gripping book. It’s definitely not one to pick up if you’re planning on reading a few pages before bed, because the light will still be burning at midnight. While there is certainly crime, it reads as a psychological thriller and the dramatic tension is handled to perfection. Every now and then the reader gets a little bit of relief before things start to escalate once again, building toward the final climatic twist with plenty of surprises along the way.

The story unfolds through the eyes of both sisters. From Sarah’s perspective, the reader gets glimpses into the reasons behind her exile from husband and child, while also following her increasingly frantic search for the sister she is so sure can help her piece things back together. By contrast, Robin may not be expecting Sarah, but she knows the past is catching up with her and the effort to prevent that from happening is threatening her very sanity.

Seddon deftly weaves the past with the present and, again using the sisters’ different points of view, slowly takes the reader through the events that have shaped the two women, bringing them to this point. Interestingly, Robin is always written in the third person, while Sarah’s chapters are in the first person. It highlights the fact that Robin has been damaged by the events of their childhood, while Sarah seems to have put it behind her and is focused on the future. Yet at the same time, this book feels as though it is more Robin’s story than Sarah’s.

This story hangs on the personalities of the sisters and despite their sizeable flaws, Seddon gives the reader plenty to like about ‘good girl’ Sarah and brash and ballsy Robin. The book also deals with a number of confronting issues, including mental illness, homophobia and the break-up of families, and the author approaches all of them with considerable sensitivity. Nothing is there for gratuitous shock value.

Don’t Close Your Eyes is a great book, and perhaps also a reminder that sooner or later, there is always a reckoning for the sins of the past.