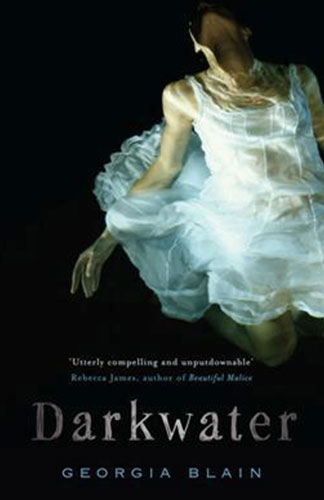 Her body was found floating facedown by the riverbank, and no one knows what happened. As rumours fly and fear grows, it seems that everyone suspects Lyndon, one of Amanda’s friends. He’s known for his temper, his cruelty and his criminal family – and now the police want to talk to him.

It’s the end of summer, 1973, the heat is enough to melt asphalt and a sleepy riverside suburb is losing some of its innocence. Fifteen-year-old Winter went to the same school and hung out in the same places as Amanda. As she finds herself alone in trying to defend Lyndon, Winter learns that you can never really know someone – and the answers she has been looking for are closer than she has ever wanted to believe.

Darkwater by Georgia Blain is a novel about murder, rumours and secrecy.

Amanda Clark is dead. No one knows who did it. All they know is that her body was found floating facedown in the river. Rumours and whispers are all that people hear and it seems that no one knows what really happens. Or, if they did, no one is going to tell what they know. As fear grows, so does suspicion. The community begin to suspect Lyndon, one of Amanda’s friends. Known for his quick-temper and criminal family, Lyndon is now the person who the police want to talk to.

It’s the end of summer in 1973. Fifteen year-old Winter went to the same school and hung out in the same places as Amanda did. She finds herself struggling to separate facts from theories as she tries to put the pieces of the puzzle together and find out who killed Amanda, if anyone. All she knows is that Lyndon didn’t do it and she seems to be the only one defending him. Winter soon discovers that you can never really know someone completely and that the answers she has been looking for is something that she never wanted to believe.

Although this book was nothing spectacular, I did like reading it and I found myself pulled into the 1970s. I loved how Georgia Blain so clearly could paint a picture of the life in that time. I felt the heat radiating off the bricks; I felt my feet burning through my shoes from the hot black cement. The way everything was described in this book was perfect and I felt like I was right there with the characters. I loved the place and time it was set in. When I think of a murder story, I always imagine a cold night in a forest or something similar to that. I think that’s why having the story set in Australia in summer was so appealing to me. I had also never read a book that was set in the 1970s and I liked experiencing what life was like then. This book is mainly about how Amanda’s death affects the community that Winter lives in. I loved seeing the community struggle to come to terms with how something this horrifying could have happened. Another part of this book that I loved was how Winter wrote down everything she heard and thought she knew about what happened to Amanda. She would try to put what she had heard into a category of either fact or theory. It was interesting to see how she would think some things were fact, and then change her mind. It made me realise how no one really knew if things were facts or not and that most of what she heard was just rumours. For example: ‘Fact: Amanda Clark had a secret.’ I liked how each chapter would begin with either a fact or a theory, however after a while, this got a bit boring and the facts became uninteresting. Like: ‘Fact: I want things to go back to the way it was.’ Umm, great fact! (not).
I didn’t feel particularly close to any of the characters in this book. I didn’t even feel like I knew Winter that well. I think that the story was more focussed around the affects of the death on the community, rather than the characters. So was I. I wanted to know what happened to Amanda and that was the key reason why I kept reading. None of the characters were very unique or different to any other characters that I’ve read about. The only time that I felt involved in Winter’s life was when she has a crush on a particular boy. This seemed like the only time she really let us into her life and how she felt. All the other times, we only could semi-understand what she felt by reading what she believed to be fact and what was just rumours.

Although the majority of the book revolved around finding out what happened to Amanda, I didn’t find it overly grabbing. Yes, I wanted to know what happened to her and that kept me reading, but I didn’t feel as though I wouldn’t be able to sleep until I found out. Unlike some books, I wasn’t reading this book non-stop to find out what happened. This book was interesting enough that I didn’t put it down in exchange for something else, but I didn’t feel as though I needed to know what happened before I could start another book. When I found out what happened, I wasn’t particularly shocked. However, I felt like the ending came too quickly. I got down almost the end of the book and I thought: Winter has to find out who killed Amanda right now or else the book is going to finish without a proper ending! Overall, this book was likeable enough. I’d give Darkwater by Georgia Blain a score of 6 out of 10. If you read this book, it should be because of how clearly Blain can paint a picture in your mind, not because of the intriguing plot or the exciting characters. This is a book that is good for an afternoon when there’s nothing better to do.

Thank you to Sarah Robinson who first published this review on her blog Written Word Worlds.
http://writtenwordworlds.wordpress.com/