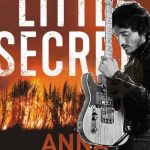 Little Secrets (Harlequin) is a stand-alone thriller like her debut novel, Only Daughter, which has been optioned in the US by Universal Pictures. Little Secrets started out as a short story for the Scarlet Stiletto Awards a few years back, but kept growing and growing until it was too long. This time the action switches from Canberra to a small town reeling from the death of a young boy in an arson attack and a journalist in search of a big story.

Anna Snoekstra was born in Canberra and studied Creative Writing and Cinema at the University of Melbourne, followed by Screenwriting at RMIT University.